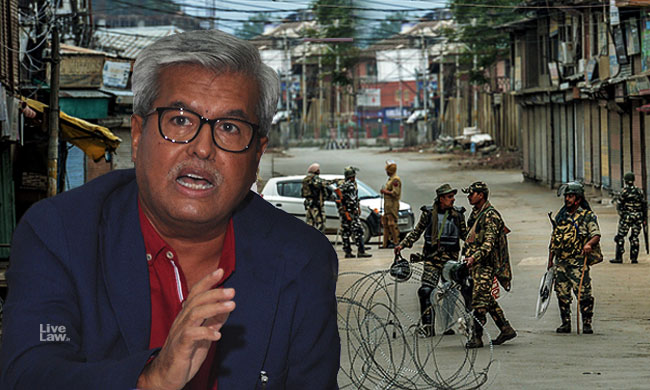 The internet shut down in Kashmir region which has been in existence for over past 100 days is a grave violation of fundamental right to life, submitted Senior Advocate Dushyant Dave before the Supreme Court on Tuesday.Dave is appearing for an intervenor in the petition filed by Anuradha Bhasin, Executive Editor of Kashmir Times daily.Dave referred to the recent landmark decision of the...

The internet shut down in Kashmir region which has been in existence for over past 100 days is a grave violation of fundamental right to life, submitted Senior Advocate Dushyant Dave before the Supreme Court on Tuesday.

Dave is appearing for an intervenor in the petition filed by Anuradha Bhasin, Executive Editor of Kashmir Times daily.

Dave referred to the recent landmark decision of the High Court of Kerala which declared that right to internet was a part of right to life and right to education.

Citing the National Telecom Policy, Dave submitted that the Central Government itself has recognized internet a basic necessity for education and communication. Despite this, the Government has snapped mobile data connections in the Kashmir region, following the abrogation of the special status of J&K on August 5.

The internet shutdown is a way for the government to avoid criticism and to prevent people from sharing their views, argued Dave. He added that the Right to freedom of speech and expression includes the right to freely circulate ideas. Article 19(1)(a) supports democracy but the government is looking to suppress it as everyone has been silenced on the apprehension that everyone is a terrorist.

Dave began his submissions before the bench comprising Justices N V Ramana, Subhash Reddy and B R Gavai by highlighting the delay in the hearing of the matters.

"We are asking the government why restrictions have not been lifted...it is our grievance that nothing has happened between August and October...Petitioners should not be looked at as being against the integrity of the nation."

Dave went on to suggest that all other matters should have been set aside by the court to hear the grievance of 7 million people.

"These 7 million people are as Indian as anyone else, even more so since abrogation of Article 370...Their grievance needs to be addressed...It's been 106 days."

The Bench then asked about the whereabouts of Solicitor General Tushar Mehta, who was arguing another matter before a constitution bench, and told the government lawyer to ensure that the SG would be present in court tomorrow and argue. "No more adjournments". The Bench further expressed its displeasure as the government had failed to submit the status report regarding public transportation since August 5 in J&K, despite being asked for it 2 hearings ago.

Right to protest cannot be taken away

Dushyant Dave then cited a judgment from the Israeli Supreme Court to highlight the manner in which terrorism was dealt with. Even if there were implications in terms of security, violations of legal rights could not be allowed, argued Dave refering to the judgment. The government cannot hide behind a likelihood of acts of terror, he said, and restrictions cannot be justified on the basis of J&K being in the grip of terror, which it has been for many years. The senior counsel was critical of the government's affidavit and called their approach casual, since the included no facts to show why such orders were passed.

Citing demonstrations in Hong Kong, which have lasted for over 50 days, Dave said there are still no restrictions there. This is the right to protest, which cannot be taken away. The government should have realized what would happen after abrogation of 370, and should have allowed protests to happen, he added. Imposing such blanket restrictions are unheard of and the court must protect the rights of citizens.

'We are becoming a police state'

Referring to constituent assembly debates, the senior counsel invoked the words of BR Ambedkar. Ambedkar's views were that rights were of no use if there was no machinery to enforce them and that Article 32 was of great significance as it is the court that will protect individual liberty. "He (Ambedkar) had faith in Your Lordships", said Dave.

Citing media reports about 10,000 people being charged with sedition in Jharkhand and examples of phone tapping in Gujarat, Dave submitted that "we are becoming a police state".

Referring to various speeches and constituent assembly debates, Dave highlighted that the executive would always try to dilute liberty and the consequent importance of enforcing civil rights through the court. Invoking speeches which warn about an executive's aim to curb liberty and its interest in social control, Dave urged that it is "only Your Lordships (that) can stop that from happening...Individual liberty cannot be subsumed by social control."

The government has "given draconian sweeping orders through which everyone is subjected to restrictions, without knowing the history or background", added Dave to show how restrictions were being imposed to test everyone as a criminal. The case of Kharak Singh, on surveillance, was then relied upon to urge that such blanket restrictions violate right to life under Art 21.

Dave then reiterated that the attitude of the government was "casual and cavalier", that they only sought time to drag on the case and that the only reason given is that the orders were required to be passed in national interest. "The Centre's argument is that no bullets have been fired...So to prevent murders will you impose 144 across the country?"

Dave reiterates that the attitude of govt is casual and cavalier. They only sought time to drag on the case. The only reason given is that it's in national interest.#Kashmir

Before concluding, Dave pointed out that no one really knew the extent of the restrictions that 7 million people have been subjected to.

He urged the court to ask the government of the ambit of the restrictions and to do so for the way they existed in August, and not November, since there have been certain relaxations. The bench assured the counsel that they would question the SG.

He further criticized the practice of submitting documents in a sealed cover. "This must stop...It denies the public the right to know."

After he concluded, senior advocate Meenakshi Arora appeared on behalf of Shoaib Qureshi and Tehseen Poonawalla. She reiterated the arguments that orders of blanket restrictions lack basis and that the state cannot curtail rights without placing any material facts. Before the bench rose, Arora highlighted that there was still no internet, effectively no transport, no SMS services, and no prepaid services functional. The poor can access government medical care only through the internet and there's no access, she said.

SG Tushar Mehta was present in court during the second half after having concluded his arguments in the other courtroom. He requested to be heard day after tomorrow, November 21, instead of tomorrow and the Bench granted his request. The matter is now adjourned till November 21, when Meenakshi Arora will conclude in 15-20 minutes, and the SG will then present his arguments.

Before Dave, Senior Advocate Huzefa Ahmadi made submissions for Journalists Union (Report may be read here)

On November 5, Advocate Vrinda Grover had made submissions on behalf of Anuradha Bhasin, Executive Director of Kashmir Times. She submitted that the internet lockdown was a disproportionate measure and that the restrictions have amounted to abrogation of the right to freedom of speech itself (Reports may be read here and here).

Later, Senior Advocate Kapil Sibal had made submissions on behalf of the Congress MP Ghulam Nabi Azad in the matter.

Sibal argued that the lockdown was highly disproportionate and added that never before have lives of seven billion people been paralyzed like this(Report may be read here).

On the next day of hearing, he submitted that restrictions of such a large scale can be imposed only be declaring an emergency under Article 352 of the Constitution and not through Section 144 of Code of Criminal Procedure (Report may be read here).