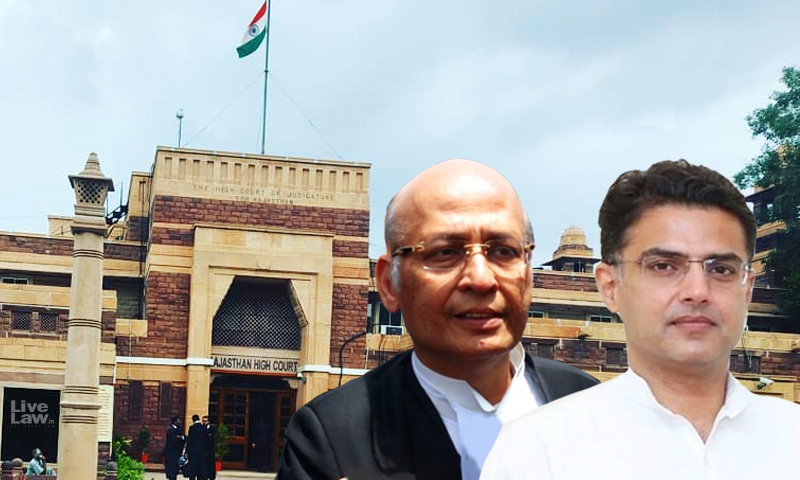 Objecting to the maintainability of the petition filed by the dissident Congress MLAs led by Sachin Pilot in Rajasthan High Court, Senior Advocate Dr. Abhishek Manu Singhvi submitted that the Court cannot interfere before the Speaker takes a final decision on the disqualification proceedings."There is no cause of action for the writ until the Speaker takes a decision on the...

Objecting to the maintainability of the petition filed by the dissident Congress MLAs led by Sachin Pilot in Rajasthan High Court, Senior Advocate Dr. Abhishek Manu Singhvi submitted that the Court cannot interfere before the Speaker takes a final decision on the disqualification proceedings.

"There is no cause of action for the writ until the Speaker takes a decision on the disqualification notice", Dr.Singhvi, appearing for the Speaker, submitted before a bench comprising Chief Justice Indrajit Mahanty and Justice Prakash Gupta.

Objections as to maintainability.

Courts cannot interfere with the house proceedings. The Speaker's decision to initiate disqualification proceedings are not amenable to judicial review. Citing the decision in Keisham Meghachandra Singh(authored by J Nariman) to state that it is for the Speaker to decide on the disqualification notices. He also cited the 2016 Amrita Rawat vs Uttarakhand Legislative Assembly Speaker decision, where the court had dismissed a petition challenging show cause notice of Speaker.

"Can speaker order that proceedings of the Court be video recorded?", Singhvi asks, saying that the Court should keep away from proceedings within House.
#RajasthanPoliticalCrisis #SachinPilot

Singhvi further responded to the challenge raised by the petitioners to the constitutionality of Paragraph 2(1)(a) of the Tenth Schedule of the Constitution.

He pointed out that the SC, in the 1992 case Kihoto Hollohan case, had rejected the very same arguments against tenth schedule, by upholding it as a reasonable restriction on free speech.

The same arguments, which were considered and rejected by the SC, are being raised by the petitioners against the constitutionality of paragraph 2(1)(a) of the tenth schedule.

Freedom of speech of a member is not an absolute freedom, the SC had held in Kihoto case. The settled position cannot be reopened by the High Court.

"Unprincipled defection is a political sin and against constitutional morality", he quoted from the SC decision in Kihoto.

He said that there was nothing new in the constitutional challenge raised by the petitioners, and that the same was raised to ask the court to do "indirectly, what it cannot do directly".

An interim order staying the Speaker's notices will amount to a stay on the operation of Paragraph 2(1)(a) of Tenth Schedule, which cannot be done.

In matters involving Constitutional challenges, Courts should be extremely loath to stay the provisions. The operation of statutory provisions cannot be stultified in the interim, Singhvi submitted, quoting SC decisions.

"The Speaker is yet to decide on the matter. Show-cause notice cannot be stayed. The questions of facts in the notices against 19 MLAs are yet to be decided. 19 MLAs will have different facts. The matters have to decided by Speaker on case to case basis. Speaker's exercise of power cannot be interdicted at this juncture", he argued.

Speaker may or may not pass a correct decision. But there cannot be an interference at the pre-order stage, preempting that Speaker will take wrong decision.@DrAMSinghvi @SachinPilot #RajasthanPoliticalCrisis

'Voluntary giving up of membership' to be read widely

Singhvi further submitted that the phrase "voluntarily given up membership of party" in Paragraph 2(1)(a) of the Tenth Schedule has to be read widely.

There is no need for formal resignation; giving up of membership can be inferred from conduct, he submitted, relying on the SC decision in Ravi Naik case(1994).

Refuting the argument of the petitioners that no jurisdictional fact is exiting for the Speaker's notices, Singhvi said that non-attendance of party meeting can also be construed as giving up of party membership.

In this context, he referred to the Karnataka MLAs disqualification case (2019), where the SC upheld the decision of the Speaker which disqualified the MLAs taking note of the fact that they had refused to attend party meetings in violation of party directions.

"Speaker may or may not pass a correct decision. But there cannot be an interference at the pre-order stage, preempting that Speaker will take wrong decision", he said.

Disqualification rules are not mandatory conditions

Next, Singhvi addressed the petitioners' arguments that only 2 days time was granted for reply, violation of the mandate of the Rules which stipulate 7 days.

He submitted that the violation of Rules can only be an irregularity and will not render the Speaker's decision void.

In this regard, he submitted that in the Ravi Naik case, the SC had upheld the decision of the Speaker, even though only 3 days time was granted for reply, despite the Rules prescribing 7 days time.

"Natural justice is not dependent on the number of days given for response. Speaker cannot shut his eyes to the developments happening fast", he submitted.

"Constitution gives leeway to the Speaker to regulate the procedure. Rules are subordinate to the Constitution. Violation of disqualification rules are procedural and any violation of it immune to judicial review", he added, referring to Ravi Naik case.

The question is not on the number of days provided; but on whether an effective opportunity was granted for giving response. In any case, the petitioners have got now seven days time to respond, as the time has been extended till 5.30 PM, July 21.

"What prevents them from replying to the show-cause notices?", he submitted.

"Petitioners are trying to ask the Court to do indirectly, what it cannot do directly", Singhvi submitted in conclusion.

After the submissions of Singhvi, the bench rose for lunch break. The hearing will resume at 2 PM.

On Friday, July 17, Senior Advocates Harish Salve and Mukul Rohatgi had advanced arguments on behalf of the petitioners.

The petitioners argued that the mere failure to attend party meetings cannot be construed as defection, and that the directions of the party whip are not applicable to meetings outside the hosue.

The petitioners also submitted that the Speaker was acting with "mala-fides" and approached the Court saying that they will not get "justice" from the Speaker as he was acting under the pressure of Chief Minister, Ashok Gehlot.

In view of the continuation of the hearings, the Speaker extended the time for submitting replies -which was to expire on Friday - till 5.30 PM, July 21.