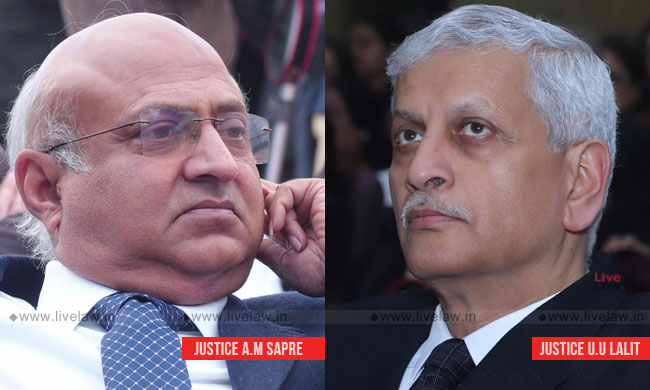 The Supreme Court has observed that the act of directing remand of an accused is a judicial function and the challenge to the order of remand is not to be entertained in a habeas corpus petition.

While allowing the appeal filed by Serious Fraud Investigation Office against the Delhi High Court order in a habeas corpus petition, the bench comprising Justice AM Sapre and Justice UU Lalit held that the compliance of sub-section (3) of Section 212 of the Companies Act, in relation to the submission of the report, is essentially directory.

Rahul Modi and Mukesh Modi had approached the High Court contending that, with the expiry of period within which the investigation had to be completed in terms of order dated 20.06.2018, all further proceedings including the arrest of the respondents were illegal and without any authority of law.

One of the questions considered by the High Court was whether it can in a proceeding for habeas corpus under Article 226 of the Constitution of India, test the correctness, legality and validity of an order of remand, passed by a Competent Magistrate. In its order, granting bail to the accused, it said that it could not justify the continued illegal detention; merely on account of the circumstance that the concerned Magistrate has rendered remand orders

In appeal, the Apex Court bench noted that the date when the matter was considered by the High Court and the Order was passed by it, not only were there orders of remand passed by the Judicial Magistrate as well as the Special Court, Gurugram but there was also an order of extension passed by the Central Government on 14.12.2018. The court said:

"The legality, validity and correctness of the order or remand could have been challenged by the original Writ Petitioners by filing appropriate proceedings. However, they did not raise such challenge before the competent Appellate or Revisional Forum. The orders of remand passed by the Judicial Magistrate and the Special Court, Gurugram had dealt with merits of the matter and whether continued detention of the accused was justified or not. After going into the relevant issues on merits, the accused were remanded to further police custody. These orders were not put in challenge before the High Court."

Disagreeing with the High Court entertaining the Habeas corpus plea, the bench said:

"It is true that the arrest was effected when the period had expired but by the time the High Court entertained the petition, there was as order of extension passed by the Central Government on 14.12.2018. Additionally, there were judicial orders passed by the Judicial Magistrate as well as the Special Court, Gurugram, remanding the accused to custody. If we go purely by the law laid down by this Court with regard to exercise of jurisdiction in respect of Habeas Corpus petition, the High Court was not justified in entertaining the petition and passing the Order."