Why SC Upheld Rights Of Erstwhile Rulers Of Travancore As "Shebait" Of Sree Padmanabha Swamy Temple? 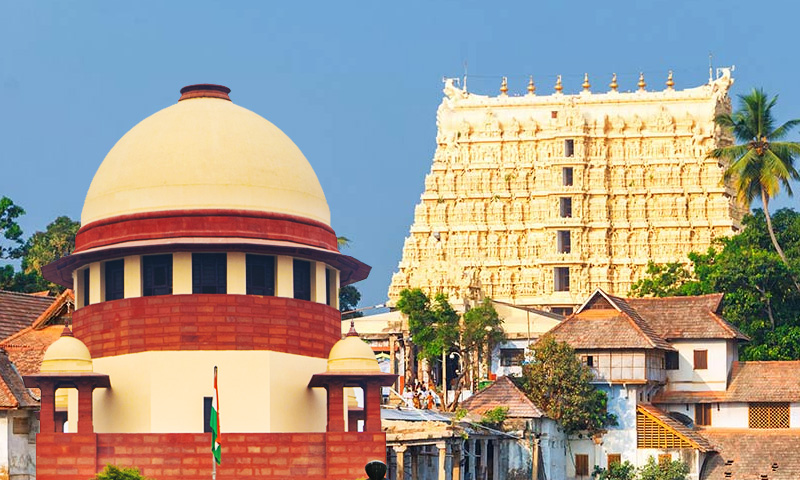 The Supreme Court in a judgment delivered on Monday, upheld the rights of the erstwhile Royal Family of Travancore as the shebait of Sree Padmanabhaswamy temple at Thiruvananthapuram. The bench comprising Justices Uday Umesh Lalit and Indu Malhotra also directed that the powers of 'the Ruler of Travancore' under the Travancore-Cochin Hindu Religious Institutions Act (TC Act) with respect...

The Supreme Court in a judgment delivered on Monday, upheld the rights of the erstwhile Royal Family of Travancore as the shebait of Sree Padmanabhaswamy temple at Thiruvananthapuram. The bench comprising Justices Uday Umesh Lalit and Indu Malhotra also directed that the powers of 'the Ruler of Travancore' under the Travancore-Cochin Hindu Religious Institutions Act (TC Act) with respect to temple administration be delegated to the Administrative Committee constituted by the court. This piece intends to summarize the issues and their consideration by the Court in its judgment.

The Kerala HC Judgment
The sole issue considered by the High Court was whether the younger brother of the last Ruler of Travancore could after the death of the last Ruler on 20.7.1991 claim to be the "Ruler of Travancore" within the meaning of that term contained in Section 18(2) of the Travancore-Cochin Hindu Religious Institutions Act, 1950 to claim ownership, control and management of the Sree Padmanabha Swamy Temple located at Trivandrum. The High Court had held that the "Ruler" is not a status that could be acquired through succession and therefore, after the death of the last Ruler on 20.7.1991, there is no Ruler in the erstwhile State of Travancore. It further held that Uthradam Thirunal Marthanda Varma cannot step into the shoes of the last Ruler to claim management of the Sree Padmanabhaswamy Temple by relying on the powers conferred under Section 18(2) of the TC Act.

In the appeal, the Supreme Court considered the issues concerning the status and entitlement of Uthradam Thirunal Marthanda Varma including the relationship vis-à-vis the Temple are concerned, under following five segments.

[A] Rulers of Travancore, till the signing of the Covenant, were in the capacity as Managers or Shebaits of the Temple
The Court, initially, examined the different accounts and beliefs with regard to the origin and how the Temple was set up, and observed that every version accepts that the King of Travancore had a role in the administration of the Temple to begin with, and that he was the one who re-constructed the Temple after a major fire that occurred in the year 1686, and installed a new idol and took full control of the Temple. The Court also observed that the stand in the affidavits filed on behalf of the State in the High Court accepts the position of the erstwhile royal family vis-à-vis the Temple and Sri Padmanabhaswamy: That the royal family of Travancore had been making endowments in favour of the Temple and that Lord Padmanabha is considered as the family deity by the erstwhile royal family.

"Leaving aside the issue of ownership as such status is not claimed by the appellant No.1 or any of the family members who have intervened, the fact remains that it is well accepted that the management of the Temple had all along been in the hands of the ruling family or the Travancore Palace. As stated by the State, that has been the traditional and customary belief. Such management has spanned, not for few years or decades, but dates back to centuries"

The court also, referred to the Amicus curiae report and other history regarding the relation between Royal Family and concluded thus:

"Tested on any parameter, such as historical accounts, popular and customary beliefs, certain practices connected with the rituals and affairs of the Temple that mandatorily require the presence and participation of the Ruler, deep involvement of the members of ruling family and their connection with the Temple and Sri Padmanabhaswamy at various stages of their lives, "The Thrippati Danam" and its significance, and long recognised and accepted fact that the management of the Temple had always been with the Ruler, lead us to conclude that for centuries, the Temple had been under the exclusive management of successive Rulers from the ruling family of Travancore and that the Rulers of Travancore, till the signing of the Covenant, were in the capacity as Managers or Shebaits of the Temple. "

"The expression Shebait is derived from "sewa" which means service and Shebait, in literal sense, means one who renders "sewa" to the idol or a deity. Every Ruler of Travancore would call himself "Padmanabhadasa" i.e. one who is engaged in the service of Sri Padmanabhaswamy. "

"As on the day when the Covenant was entered into by the Ruler of the Covenanting State of Travancore, apart from other incidents which normally follow the rulership, he was holding the office of Shebait of the Temple and represented a continuous and unbroken line of successive Shebaits traced from the original founder; and being a Shebait of the Temple, he was having all the rights and interest as laid down by decisions referred to hereinabove. "

[B] Covenant Acknowledged That Administration Vested With Ruler

The Court then proceeded to examine the effect of the Covenant that was entered into in May 1949. It concluded that that Article VIII of the Covenant not only acknowledged and accepted the factum that the administration with respect to the Temple, its properties, as well as with respect to Pandaravaga properties, had already vested in "the Ruler of the Covenanting State of Travancore", but the said Article expressly continued the same status and stipulated that such administration shall be conducted subject to the supervision and control of "the Ruler of Travancore".

Another issue examined in this connection was whether the references in said Article were only to the person who was the Ruler at the time the Covenant was entered into and would not include successors to said Ruler. The court noted that, wherever special attributes or rights were designed to be conferred upon and restricted to "the present Ruler", the Covenant was quite specific.

[C] Constitution [Before 26th Amendment] & TCHRI Act Did Not Adversely Impact 'Ruler's Right To Administration
The Court thus proceeded to consider the effect of the Constitution of India as it stood before the Constitution (Twenty Sixth Amendment) Act, 1971 - which abolished privy purses- and of the provisions of TC Act. The court held that the relevant provisions of the Constitution of India as well as that of the TC Act did not, in any way, upset or abridge the status enjoyed by the Ruler of Travancore as Shebait of the Temple and also did not, in any manner, adversely impact the right of administration vested in the Ruler of Travancore.
[D] Constitution (Twenty Sixth Amendment) Act, 1971 did not in any way impact or affect the administration of the Temple
The Court also considered the effect of 26th Constitutional Amendment which inserted Article 363A which stipulates that any person who was recognized to be the Ruler of an Indian State or his Successor, shall, cease to be recognized, as such Ruler or Successor, and all rights, liabilities and obligations in respect of Privy Purses stand extinguished. The court, in this regard observed that, the deletion of Article 362 by itself would not result in cessation of every privilege or personal right with respect to which "due regard" was had while exercising legislative power in terms of Article 362 before its deletion. It said:

The Court concluded that the Constitution (Twenty Sixth Amendment) Act, 1971 did not in any way impact or affect the administration of the Temple, Sri Pandaravaga properties and the properties of the Temple, which continued to be under the control and supervision of the Ruler of Travancore.
[E] Death of the person who had signed the Covenant  would not affect shebaitship
In this regard, the Court considered the issue whether the expression "Ruler of Travancore" as appearing in Chapter III of Part I of the TC Act is capable of being understood to include his successors according to custom.

"We hold that the death of Sree Chithira Thirunal Balarama Varma who had signed the Covenant, would not in any way affect the Shebaitship of the Temple held by the royal family of Travancore; that after such death, the Shebaitship must devolve in accordance with the applicable law and custom upon his successor; that the expression "Ruler of Travancore" as appearing in Chapter III of Part I of the TC Act must include his natural successors according to law and custom; and that the Shebaitship did not lapse in favour of the State by principle of escheat.

Further, unless and until the line of succession of the Shebaitship and in-charge of the administration, is completely extinct, there can be no question of escheat as observed by the High Court, the Court held.

Other Issues Refused To Consider

The court refused to consider the following issues on the ground that no factual foundation was also laid either before the High Court or in the form of pleadings before the Supreme Court. Those issues were whether the role played by the Royal Family as descendants of Maharaja Aditya and as "Padmanabhadasa" is essential and integral to the very foundation and identity of the Temple and whether "Parashurama Padhati" being practiced has a distinct identity of its own action ?. The Court also refused to give a finding regarding violation of any rights under Articles 25 and 26 of the Constitution.