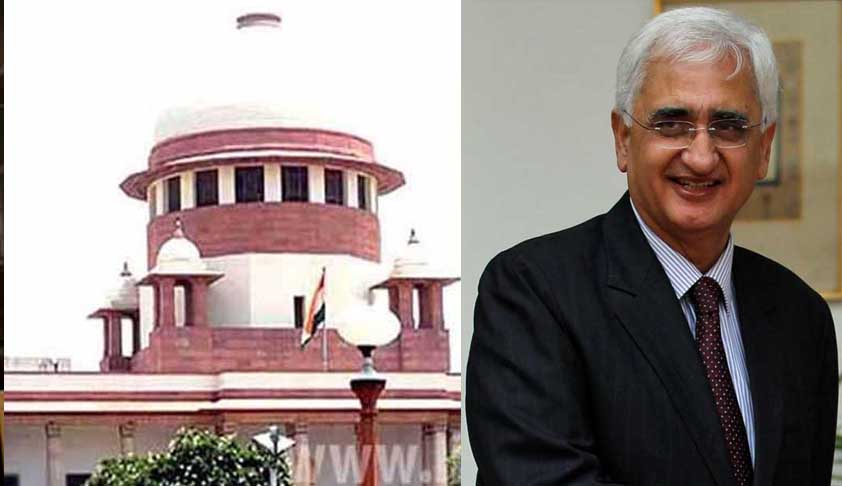 In his Written Submissions to the 5 Judge Constitution Bench hearing petitions challenging triple talaq, Senior Counsel Salman Khurshid has proposed that Triple talaq be treated as one, revocable Talaq.“It is clear that the practice in most Muslim countries is to treat Triple Talaq not as three pronouncements in one sitting counting as a valid irrevocable divorce, but rather as...

In his Written Submissions to the 5 Judge Constitution Bench hearing petitions challenging triple talaq, Senior Counsel Salman Khurshid has proposed that Triple talaq be treated as one, revocable Talaq.

“It is clear that the practice in most Muslim countries is to treat Triple Talaq not as three pronouncements in one sitting counting as a valid irrevocable divorce, but rather as one pronouncement. The view that triple talaq cannot be an effective divorce if made as three irrevocable pronouncements in one sitting is supported by many judicial rulings over many decades, and as recently as 2008,” Mr. Khurshid asserted, thereby submitting that this is the correct view, and is consonant with the letter and spirit of the Quran.

He went on to submit that the real problem is neither triple talaq nor talaq per se but rather the fact that the “institutional arrangement has been by-passed”, as even unilateral talaq by the husband has to be for a reasonable cause, and preceded by attempts by mediators from either side who report to a qazi, thereby signifying an element of adjudication.

Furthermore, Mr. Khurshid pointed out the lack of reliable data to show that triple talaq amongst Muslims exceeds divorce amongst other communities. He therefore submitted, “Unless talaq (which is only one part of a comprehensive scheme of marriage and divorce) itself is found unacceptable, the anxiety expressed about triple talaq seems misplaced given that there is more than adequate judicial and legislative material to establish that irrespective of the number to times talaq is expressed at one sitting it will count only as one. It is humbly submitted that once that is taken as the accepted position there is no further issue about Halala since talaq Ahsan allows a fresh nikah in case the same couple wants to get back together.”

In his submissions, Mr. Khurshid also contended that the mere repetition of divorce thrice in one sitting does not amount to a Mughallaza or final divorce. He cited Hadith to submit that the Prophet considered three divorces in one sitting as one. He made reference to an incident when once news was brought to him that one of his disciples had divorced his wife, pronouncing the three talaqs at one and the same time, the Prophet stood up in anger on his carpet, and declared that the man was making a plaything of the words of God. The Prophet had then made him take back his wife.

Mr. Khurshid further submitted that the Quran has nowhere ordained that the three divorces pronounced in a single breath will have the effect of three separate divorces. “Therefore, according to the Holy Quran divorce is permissible only twice during the lifetime of the husband. The possibility of being with the wife is still open after two pronouncements of divorce. It is only after the third divorce is pronounced that the divorce becomes irrevocable. The essence of the provision is to give some time to the husband to make a conscious decision as to whether he wants to irrevocably break the marriage tie and also to stop the earlier practice of divorcing the wife as many times as one may wish for during their lifetime,” he averred.

He also pointed out that several Islamic countries no longer recognize triple talaq as a valid form of divorce, with the realization that Triple Talaq does not have any foundation in the teachings of Islam; and certainly not any place in the modern world under Islamic law.

With regard to the scope of Court’s interference, Mr. Khurshid submitted that it is not the role of the Courts to interpret Muslim Personal Law, but it can hold which interpretation is correct. He therefore contended, “The role of the Court, not being a body necessarily well versed in the intricacies of the faith or vested with the trust and authority of its followers, is not to interpret the teachings of the Holy Quran and the Hadis. The role of the Court is to look at the interpretations offered by scholars and imams and decide which is the correct one to apply to a given case.”