India Begets Its First Lokpal, And How - Hitherto Unopposed And Virtually Opaque? 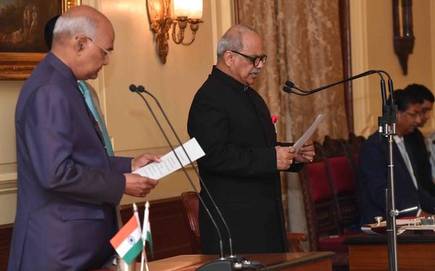 From being recommended by the First Administrative Reforms Commission back in 1966, from as many as eight failed attempts at a legislation up till 2011, to crusader Anna Hazare's hunger-strike the same year that effectively set the Parliament in motion, to the law eventually seeing the light of the day in January, 2014, and after battling it out at the apex court for nearly five years hence,...

From being recommended by the First Administrative Reforms Commission back in 1966, from as many as eight failed attempts at a legislation up till 2011, to crusader Anna Hazare's hunger-strike the same year that effectively set the Parliament in motion, to the law eventually seeing the light of the day in January, 2014, and after battling it out at the apex court for nearly five years hence, on Saturday India got its first Lokpal chairperson in former Supreme Court judge Justice Pinaki Chandra Ghose.

Soon after the bench headed by Chief Justice Ranjan Gogoi requested Attorney General K. K. Venugopal on March 7 to ensure that the meeting of the Selection Committee is convened immediately, the constitution of the Lokpal was finalised, preceding the impending Lok Sabha elections by only a matter of weeks.

But within hours of the PM-led Selection Committee (which also comprised CJ Gogoi) recommending Justice Ghose on Sunday, the retired judge's name displayed signs of becoming a bone of contention- Advocate Prashant Bhushan (who represented NGO Common Cause before the apex court on the issue of non-appointment of the anti-graft ombudsman) tweeted about how allegedly, in 2013, Justice Bhaskar Bhattacharya (then the Chief Justice of the Gujarat High Court) had written to the President that while his elevation to the top court was blocked for opposing the appointment to the Calcutta High Court of "the undeserving sister of former CJI (Altamas) Kabir", Justice Ghose, having favoured Justice Shukla Kabir Sinha's elevation to the bench, got to supersede him in coming to the Supreme Court.

"Why was Lokpal shortlist not disclosed?", asked Bhushan on his Twitter handle.

In a second tweet, the lawyer commented that the organisation of the Lokpal by the "Modi govt" was "totally compromised" in as much as they "sat on it for 5 years", "didn't allow LoP to participate in Selection", "they appointed their man (Senior Advocate Mukul Rohatgi) as 'eminent jurist' in Selection panel" and "then selected people without transparency".

Interestingly, during the NJAC hearing, as the government's top law officer, Rohatgi had himself asked the constitution bench how CJ Kabir's sister came to be a High Court judge- "What was the weightage given to the letter written by a fellow judge?", he had urged on that occasion.

Even the appointments of the Lokpal Members have raised their own share of eyebrows.

Among the Non-Judicial Members is retired IRS officer Mahender Singh who was reportedly the subject of several allegations as to his integrity and as such, despite his relative seniority, could be appointed as a Member of the Central Board of Indirect Tax and Customs only upon successfully fielding the attacks. Anyhow, he lost out on being the Chairman of the Board.

Then there is IAS officer Dinesh Kumar Jain who was last year appointed as the Chief Secretary to the BJP-ruled Maharashtra government in super session of two more senior contenders. In January, he even earned an extension immediately before his approaching superannuation, much to the dismay of other senior bureaucrats.

Next is DGP-rank Tamil Nadu-cadre IPS officer Archana Ramasundaram who was embroiled in controversy when UPA II appointed her as the first ever woman Additional Director of the CBI in 2014, overlooking the recommendation of the Selection Committee. Consequently, the state government initiated disciplinary proceedings against her on charges that she had "deserted" office. While the said appointment was in challenge before the Supreme Court, the Home Ministry in 2015 posted her to the National Crime Records Bureau. In 2016, she came to be the first woman Director-General of the Sashastra Seema Bal, one of India's Central Armed Police Forces.

Finally, there is retired Gujarat-cadre IAS officer Indrajeet Prasad Gautam, who is widely touted as having been greatly instrumental in the progress of Ahmedabad, prominently the Sabarmati Riverfront Development Project which PM Modi had showcased as one of his major accomplishments as the CM of Gujarat while contesting the 2014 General Elections from Varanasi. Gautam is at present the Managing Director of the Gujarat Metro Rail Corporation

After the Supreme Court in 2017 deemed fit even a truncated Selection Committee, devoid of the Leader of Opposition in the Lok Sabha, to proceed with the appointment of the 'eminent jurist', the Search Committee and finally the Chairperson and Members of the Lokpal, Mallikarjun Kharge (Congress leader in the Lok Sabha) boycotted the Committee's meetings. Miffed at his status being reduced to merely a "special invitee" by the Committee, he dissed it as a "concerted effort to exclude the independent voice of the opposition altogether".

What followed was that the PM, the Lok Sabha speaker and ex-CJI Dipak Misra then chose, as the 'eminent jurist', Rohatgi, who had served as the AG in the first three years of the BJP-helmed NDA regime. In the capacity of the AG, he had even argued that the appointment of the Lokpal cannot be effected till such time the 2013 Lokpal Act is amended to recognise the Leader of the single-largest Opposition Party in the event when there is no clear LOP.

In her article in 'The Wire', RTI activist Anjali Bharadwaj has canvassed how, in view of Kharge's sublimated exclusion and Rohatgi being brought on board, there was "a preponderance of government representatives and nominees on the selection committee", and therefore "an inherent bias towards recommending candidates favoured by the government", which in turn defeats the very purpose of the Lokpal law.

In fact, back in January 2014, Union Minister Arun Jaitley, then the Leader of Opposition in the Rajya Sabha, had taken objection to the DoPT inviting applications to the posts of Chairperson and Members of the Lokpal. That the Act envisages the appointments to be not at the behest of the government, but by a well-balanced committee of the PM, the Lok Sabha Speaker, the CJI, the LoP and an 'eminent jurist' unanimously chosen by the four, was the stand. Subsequently, in September 2014, at the recommendation of a committee headed by AG Rohatgi, the Search Committee Rules were modified to empower it to suggest to the Selection Committee names beyond the list provided by the Central government in the DoPT.

However, in the face of how things have transpired- what with the government failing to enact a simple amendment (no different from one already introduced in the DSPE Act for the appointment of the CBI Director) to allow Kharge's productive participation in the selection process of the Lokpal- decisions at all stages (from the setting up of the Search Committee under the headship of Justice Ranjana Prakash Desai to the appointment of the Lokpal) came to be at the instance of a Selection Committee which, as Bharadwaj puts it, "ended up with a majority of representatives with allegiance to the ruling dispensation" (by virtue of CJ Gogoi's own judgment, the Chief Justice's opinion having no primacy in the matter).

The significance of the LoP under the Lokpal law has previously also been acknowledged by former Chief Justice R.M. Lodha, who had articulated that the LoP conveys the voice of a representative different from the government in the House.

To amplify this skepticism anyway surrounding the Lokpal appointment is the lack of transparency in the process- the shortlisting criteria adopted by the Search Committee continues to remain a secret, as do the minutes of the Selection Committee meetings under the RTI Act, writes Bharadwaj.

On March 7, Bhushan had even prayed that in keeping with the spirit of section 4(4) of the Lokpal Act which mandates transparency in the selection procedure, the names recommended by the Search Committee be placed in the public domain. But the bench of Chief Justice Gogoi was of the view that "no direction from the Court should be issued in this regard. Rather the matter should be left for a just determination by the Selection Committee as and when the meeting of the Committee is convened".

Even as the DoPT now reveres them as "secret documents", in January 2016, in pursuance of a direction of the Central Information Commission, the Department had been happy to divulge a list of Lokpal aspirants. The list had included four apex court judges as nominees of the Supreme Court, of which one happened to be Justice Ranjana Prakash Desai (for the post of a Judicial Member).

"It is only when the names of the candidates for such sensitive posts are disclosed that the public can bring up various facts, which may or may not have been disclosed by the candidates, to the notice of the Selection Committee. This would enhance public confidence in the selection process. Moreover, it is desirable that the entire selection process should be transparent", the CIC had observed then.

The state of affairs being what it is, it remains to be seen if this appointment of Justice Ghose or any of the other Members (as awaited as it was) runs into rough weather.

Mehal Jain is an Associate Editor of LiveLaw.