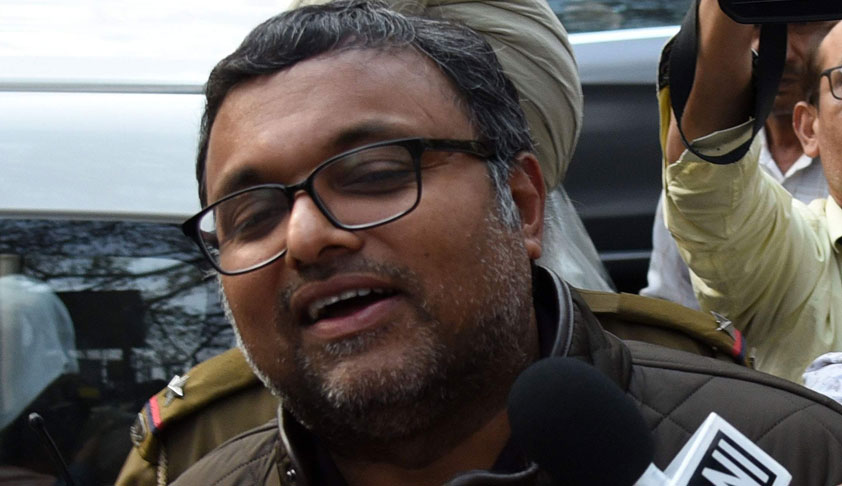 Subscription starts from
₹ 599+GST
(For 6 Months)
View Plans
Premium account gives you:
Subscribe Now
Already a subscriber?
Login
CBI is already investigating the case, registered on May 15, 2017, and the ED has no jurisdiction to summon him for the same case, Karti said in his petition

Karti Chidambaram, son of former Union Minister P Chidambaram, has approached the Supreme Court by filing a fresh writ petition for the quashing of all criminal proceedings initiated against him under the Prevention of Money Laundering Act (PMLA) by the Enforcement Directorate in connection with FIPB approval for Aircel-Maxis and INX Media in 2006 and 2007.

He also challenged the summons issued by the ED to interrogate him in the cases.

Karti’s counsel mentioned before the bench of Chief Justice of India Dipak Misra, Justice AM Khanwilkar and Justice DY Chandrachud, The bench agreed to hear the petition tomorrow.

In the petition, Karti said the ED’s action is “the serious infringement of the Petitioner's fundamental right to live with dignity guaranteed under Article 21 read with Articles 14 and 19 of the Constitution of India”.

Karti was arrested by the CBI last week in connection with alleged graft to obtain FIPB approval for INX Media when his father was finance minister in the UPA government.

Questioning the authority of the ED, Karti said the CBI is already investigating the case, registered on May 15, 2017, and the ED has no jurisdiction to summon him for the same case. He alleged that the ED’s motive is to harass him and disrepute the whole family.

“The 2nd Respondent (ED), acting arbitrarily with malice in law and fact, and without authority of law, has unleashed a series of acts to destroy and damage the reputation of the Petitioner and his family which they have assiduously built over the years by leading a life of integrity and honesty.

There is a determined campaign by the 2nd Respondent through the media to bring discredit to the Petitioner and his father and embarrass and humiliate the Petitioner in the eyes of the public,” he alleged.

Denying all the allegations, the petitioner said he had no connection whatsoever with the FIPB or the approvals granted by the FIPB.

“In gross abuse of the process of law, investigations have been launched by the CBI and the 2ndRespondent (ED) against the Petitioner in connection with the FIPB approvals granted in the above two cases,” the petition said.

(a) Issue a Writ of Declaration declaring that the 2nd Respondent has no jurisdiction to conduct any investigation unrelated to the allegations in the FIR RC2202017 E 0011 dated 15-05-2017 registered by the CBI and quash all the proceedings initiated by the 2nd Respondent under F.No. ECIR/7/HIU/2017 as unreasonable, without jurisdiction, without authority of law, in colourable exercise of power and vitiated by malafides.

(c) Without prejudice, to issue a Writ of Mandamus directing the 2nd Respondent to forbear from investigating under the Prevention of Money Laundering Act, 2002 the commission of a predicate/scheduled offence or the existence of proceeds of crime (which fall within the exclusive jurisdiction of the CBI) in the M/s INX Media FIPB approval case and to investigate the alleged offence of money Laundering only if and after the 30 proceeds of crime arising out of a predicate/scheduled offence are identified by the CBI.