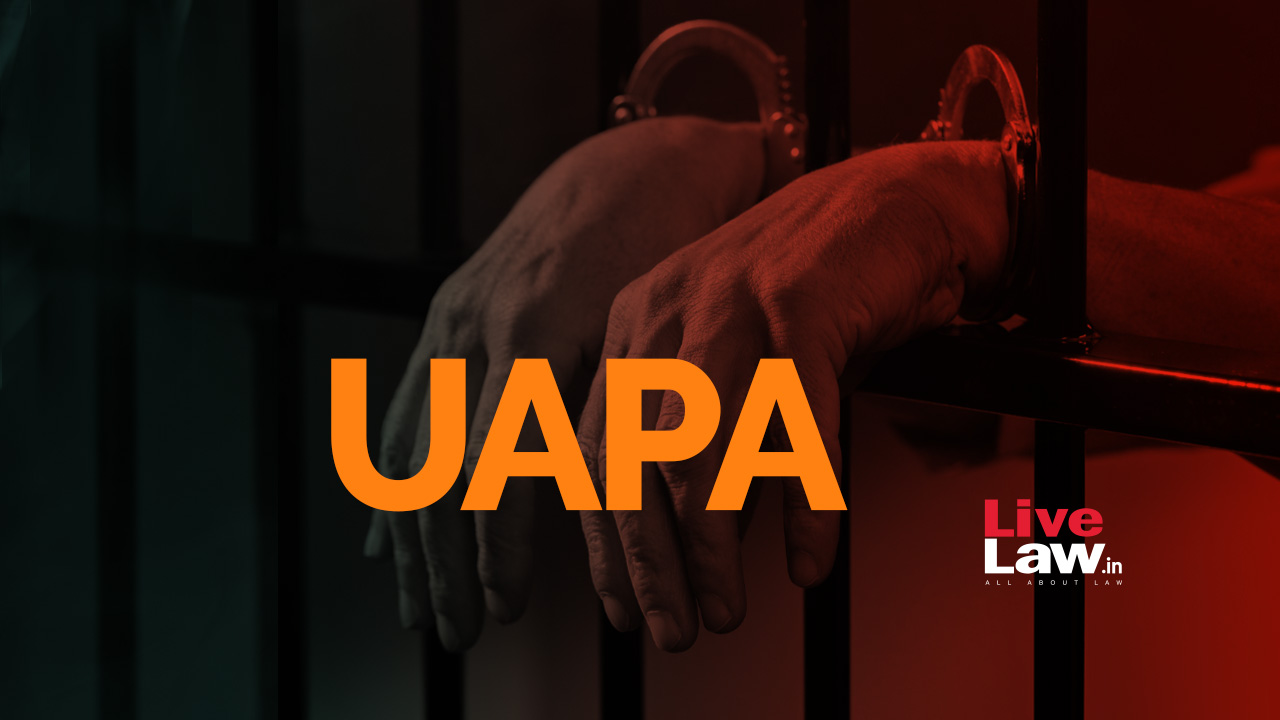 The Nagpur Bench of Bombay High Court Friday ordered release of former Delhi University Professor GN Saibaba and five others in a UAPA case that accused them of being members and sympathisers of the banned CPI (Maoist). A day later, the judgement was suspended by the Supreme Court.

The high court in its decision on the appeals against the conviction held the trial to be "null and void" after ruling that the same took place in the absence of valid sanction under Section 45(1) of the Unlawful Activities (Prevention) Act.

The Maharashtra government within hours of the pronouncement challenged the judgement before the Supreme Court. Solicitor General Tushar Mehta, appearing for the State, on Saturday argued that the question regarding sanction was not raised before the trial court.

After the hearing, the apex court in the interim order suspended the High Court ruling, saying that the Nagpur Bench has not decided the case on merits.

"The offences for which the accused were convicted by the learned trial Court are very serious and if ultimately they are tested by the High Court on merits and on merits the State succeeds and the judgment and order passed by the learned trial Court is upheld, the offences are very serious against the sovereignty and integrity of the country," said the court.

As a result, all the convicts will continue to remain in jail. A prayer for keeping Professor Saibaba under house arrest instead of continuing with his incarceration was sternly opposed by the State with Mehta even arguing that such requests were repeatedly coming from "Urban Naxals". The court also was not inclined to allow the prayer at this stage.

Live Law looks at the UAPA provisions, the 2008 UAPA Rules and various judicial interpretations of the sanction process

The anti-terror law, which is often described as draconian for its provisions that make it almost impossible for an accused to secure bail, has been divided into seven chapters. The law was enacted for "more effective prevention of certain unlawful activities of individuals and associations" and "for dealing with terrorist activities".

Section 45 of the Act deals with cognizance of the offences mentioned under the law, by a court of competent jurisdiction.

It states that no court can take cognizance of any offence under Chapter III - this section relates to unlawful activities and membership of unlawful associations and their funding, without the previous sanction of central government or the officer authorised by it.

The provision also deals with the cognizance of offences under Chapter IV and VI - these sections relate to terrorists, their activities and the terror organisations.

Under The Unlawful Activities (Prevention) (Recommendation and Sanction of Prosecution) Rules, 2008, the Competent Authority, after receiving the report containing evidence gathered by the investigating officer, is required to make a recommendation to the government within seven days. Thereafter, the government is also required to take a decision regarding sanction of prosecution within seven days after receipt of the recommendations from the authority.

The competent authority under the law is required to make "an independent review" of the evidence gathered by the investigating officer and only then make his recommendation for or against sanction to the government.

The division bench of Justices Rohit Deo and Anil Pansare, in the judgement discharging Professor Saibaba and others, asserted that sanction "serves the salutary object of providing safeguard to the accused from unwarranted prosecution and the agony and trauma of trial". Terming Section 45 of UAPA a legislatively-provided additional safeguard, the court said recommendatory report is not binding on the sanctioning authority.

However, the court held that the words 'shall' in the 2008 rules is intended only to convey a sense of urgency to the authorities but is not mandatory. The bench clarified that it was not suggesting that the time frame can be violated with impunity. It noted that while any infraction in complying with the deadline does not vitiate the sanction, an accused will have to demonstrate some prejudice or "causation of failure of justice" due to the "failure to adhere to the time frame statutorily prescribed".

However, it set aside the entire trial against Professor Saibaba on the ground that Sessions Judge took cognizance of the offences against him, framed the charges and examined the first prosecution witness, in absence of the sanction - which came much later. "The statutory bar is not lifted, and therefore, the cognizance and the subsequent proceedings cannot be clothed with the sanctity of finding, sentence or order rendered by a Court of competent jurisdiction," it held.

Kerala High Court too has earlier dealt with similar questions in a case against a member of CPI (Maoist). The division bench of Justice K.Vinod Chandran and Justice C. Jayachandran in the decision dated March 17 said the provision for sanction is mandatory and sacrosanct.

"We find the sanction order of the UA(P)A to be not brought out in time, as statutorily mandated and bereft of any application of mind; both vitiating the cognizance taken by the Special Court," said the court, while setting aside the cognisance taken by the sessions court against the accused.

The Nagpur Bench in its Friday's decision, after perusal of Kerala High Court's judgment, said it is not inclined to hold that the time limit prescribed for making the recommendation or according sanction is mandatory. Last month, the Supreme Court permitted the Kerala government to withdraw its appeal against the March 17 decision after it submitted that the High Court's strict interpretation appears to be correct.

However, the bench headed by Justice M.R. Shah then kept the question of law open. It was the bench of Justice Shah and Justice Bela Trivedi which heard the matter on Saturday.

In 2019, the Kerala High Court had ruled that "the sanctioning authority as well as the State are expected to scrupulously stick to the time frame, particularly in view of the very stringent provisions of the Act". Justice Raja Vijayaraghavan in the ruling said that when conditions for grant of bail under UAPA and penalties are stringent, the sanction process "must have to be adopted very seriously and exhaustively than the sanction contemplated in other penal statutes".

Maharastra government on Saturday cited a 1998 judgement of Gujarat High Court on Terrorist and Disruptive Activities (Prevention) Act, which has since been repealed, to contend that the question regarding process of sanction cannot be raised at the stage of appeal. SG Tushar Mehta also referred to Section 465 CrPC to state that irregularities in sanction for prosecution will not vitiate trial.

The Supreme Court in State of M.P vs Virendra Kumar Tripathi - wherein the allegation was that sanction under the Prevention of Corruption Act was not accorded in accordance with law and Special Judge on this ground had discharged the accused, in 2009 said:

Section 19(3) of the PC Act makes it clear that "no finding, sentence or or order passed by a Special Judge shall be reversed or altered by a Court of appeal on the ground of absence of/or an error, omission or irregularity in sanction required under sub-section(1) of Section 19 of the PC Act unless in the opinion of the Court, a failure of justice has in fact been occasioned".

On Saturday, the Solicitor General said that Section 43C of UAPA makes CrPC applicable to the Act, while arguing in context of Section 465 CrPC - a provision which is almost similarly worded as Section 19(C) of the PC Act. Section 43C of UAPA states: "​​The provisions of the Code shall apply, insofar as they are not inconsistent with the provisions of this Act, to all arrests, searches and seizures made under this Act."

The Nagpur Bench in the judgement delivered on Friday said an egregious defect in sanction or absence of sanction "cannot be equated with error, omission or irregularity in sanction". It was responding to an argument that Section 465 specifically refers to error or irregularity in any sanction for prosecution, and provides that failure of justice will have to be "demonstrated as sine qua non for reversing finding or sentence rendered by a Court of competent jurisdiction."

In another judgement related to the prosecution sanction under PC Act and its interplay with Section 465 CrPC, the Supreme Court, while setting aside the orders of Patna High Court in 2014 said that in a situation where under both the enactments any error, omission or irregularity in the sanction, which would also include the competence of the authority to grant sanction, does not vitiate the eventual conclusion in the trial including the conviction and sentence, unless of course a failure of justice has occurred, it is difficult to see how at the intermediary stage a criminal prosecution can be nullified or interdicted on account of any such error, omission or irregularity.

In the operative part, it said:

"In the instant cases the High Court had interdicted the criminal proceedings on the ground that the Law Department was not the competent authority to accord sanction for the prosecution of the respondents. Even assuming that the Law Department was not competent, it was still necessary for the High Court to reach the conclusion that a failure of justice has been occasioned. Such a finding is conspicuously absent rendering it difficult to sustain the impugned orders of the High Court."

In Nanjappa v. State of Karnataka (2015), the Supreme Court, in a case under the Prevention of Corruption Act, held that a trial with invalid Sanction is null and void. In this judgment, the Court observed that the question, regarding validity of a sanction for taking cognizance of the complaint against a public servant, can be raised at any stage of the proceedings.

"If the trial Court proceeds, despite the invalidity attached to the sanction order, the same shall be deemed to be non-est in the eyes of law and shall not forbid a second trial for the same offences, upon grant of a valid sanction for such prosecution," the Court observed.