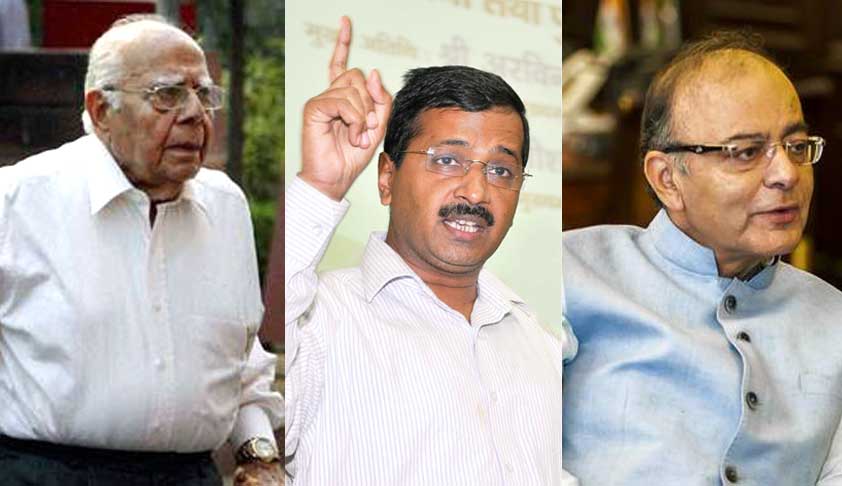 The Delhi High Court on Wednesday junked Chief Minister Arvind Kejriwal’s petition for striking off certain submissions made by Finance Minister Arun Jaitley to prove his case that he was called a “crook” and “guilty of crimes and crookery” by his former counsel during cross-examination in a defamation suit emanating out of allegations of corruption in the Delhi District Cricket Association (DDCA).

Justice Manmohan dismissed the application moved by Kejriwal praying the court to expunge certain preliminary submissions in the replication filed by Jaitley in the second defamation suit which came to be filed by the Union minister after being referred to as ‘crook’ by senior advocate Ram Jethmalani, then appearing for the AAP leader, in the DDCA defamation matter.

However, as Kejriwal’s counsel had stated that he has not had the opportunity of rebutting the documents referred to in the replication, the court permitted him to file an additional written statement within four weeks.

It is to be noted that Jaitley had, in his replication, submitted that: “It was only after the notice was issued by this Hon’ble Court on 23.07.2017 (in second defamation suit) and summons were served on the Defendant (Kejriwal) on 06.06.2017, that the Defendant, in order to concoct a moonshine defence in the instant proceedings, speciously wrote to his senior Advocate (Jethmalani) on 20.07.2017 allegedly denying his specific instructions (to call him a crook)”.

Jaitley had also referred to Jethmalani’s interview published in The Times of India to say that Jethmalani had voluntarily waived the lawyer-client privilege, not only during the cross examination on 17th May, 2017 itself, but also subsequently in his interview to The Times of India news portal as well as his letter addressed to the plaintiff. Herein, he claimed to have received instructions from Kejriwal to use the defamatory word against Jaitley and that he had used far more objectionable words for him. He had also submitted that if Jethmalani had made such remark without Kejriwal’s knowledge, then the latter should have made a complaint against him with the Bar Council of India.

Kejriwal’s current counsel senior advocate Anoop George Chaudhari stressed that Jaitley had exploited the opportunity of filing the replication for the purpose of introducing new allegations of defamation to make out a fresh case in addition to the case set out in the plaint.

He contended that Jaitley, by bringing in the additional / new facts in the replication, intended to ‘rob’ Kejriwal of a chance to file a reply to the allegations made.

Chaudhari further submitted that the subsequent allegations constitute a cause of action within the meaning of Order 7 Rule 1(e) CPC and hence, the same should have been incorporated by way of amendment of the plaint rather than importing the same ‘circuitously’ in the replication.

He relied on Anant Construction (P) Ltd vs Ram Niwas, wherein it was held that, “Any subsequent pleading inconsistent with the original pleading shall be refused to be taken on record and if taken, shall be liable to be struck off and taken off the file”.

Meanwhile, Rajiv Nayar, senior counsel for Jaitley, submitted that the pleas in the replication were neither inconsistent nor at variance with the original pleadings.

The court analysed the scope and ambit of Order 6 Rule 16, CPC, which provides that “the court may at any stage of the proceedings order to be struck out or amended any matter in any pleading which may be unnecessary, scandalous, frivolous or vexatious, or which may tend to prejudice, embarrass or delay the fair trial of the suit, or which is otherwise an abuse of the process of the court”.

While referring to the apex court case titled Abdul Razak vs Mangesh Rajaram Wagle and Others, Justice Manmohan said, “This court is of the view that the pleadings can be ordered to be struck off under Order 6 Rule 16, CPC only if they are shown to be unnecessary, scandalous, frivolous or vexatious or abuse of the process of law or if they amount to re-litigation or tend to embarrass the defendants in the trial of the suit.”

The court noted that Kejriwal had himself relied on the letter he had written to Jethmalani on July 20, denying any specific instructions to use the defamatory words in the cross-examination.

“In the opinion of this Court, the plaintiff, in its replication, has neither made out a new case nor a fresh cause of action or enlarged the scope of the suit. In fact, the replication in the present instance contains averments and evidence in support of the original cause of action as mentioned in the plaint and is the plaintiff’s answer to the defendant’s plea in the written statement…,” said Justice Manmohan.

“The pleas in the replication are not inconsistent or at variance with the original pleadings,” he held, adding that neither Order VI nor Order VII CPC has been violated in the present instance.

“In fact, the averments in the replication crystallize the plaintiff’s stand on an important issue and are relevant to the case at hand. Consequently, replication can neither be termed as scandalous nor frivolous or vexatious or unnecessary or abuse of process of law,” he said.