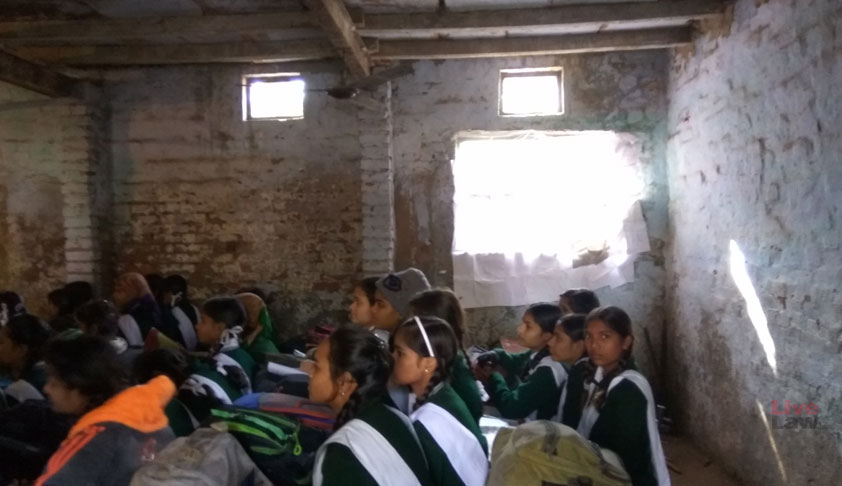 The Delhi High Court on Thursday directed razing down of the building of a fully-aided government school in northeast Delhi after a team of PWD engineers submitted an inspection report stating that the building is in a dilapidated condition with beams missing, thus, making it unsafe for occupancy, and that students be shifted to any suitable place.

A bench of Chief Justice Rajendra Menon and Justice VK Rao ordered that Alok Punj Secondary School at Karawal Nagar be demolished and its students moved to other schools while taking note of the inspection report placed before it by the Deputy Director of the Delhi government’s Department of Education.

The court’s order will make way for a proper building to be erected for the school.

The court had ordered an inspection to be carried out after NGO Social Jurist through its advocate and social activist Ashok Agarwal moved court against the pathetic state of the school which he happened to visit recently.

Agarwal told the court that “over 2,600 students studying in Classes VI-XII in 100% aided Alok Punj Secondary School, Karawal Nagar, Delhi have been unjustly deprived of both physical infrastructure and academic faculty. Basic amenities like potable drinking water, functional toilets, science lab, computer lab, functional blackboards, clean classrooms, playground and sports equipment are almost absent in the school. In addition, out of the total strength of sanctioned teaching posts of 91, over 72 are lying vacant”.

Several photographs taken by Agarwal showed students clamped in various dimly-lit and poorly-ventilated classrooms with no access to a functional toilet block and potable water.

Agarwal said he had written to Chief Minister Arvind Kejriwal suggesting an amendment to the Delhi School Education Act, 1973, analogous to Section 15 of Kerala Education Act, 1958, which provides for the acquisition of land underneath the schools by the Government of Kerala in lieu of compensation.

In the instant case, Alok Punj Secondary School has been in existence since the year 1976 and was built by Alok Punj Vidyapeeth (Regd) on land measuring 5000 sq. yds. belonging to Anoop Singh, Anoopi and Satish Chaudhary.

In 1982, the Government of Delhi began granting aid to the extent of 95 per cent to the said school. In June 1995, the school was brought under the complete aegis of the government and the management of the school was taken over by it.
In compliance with the court’s August 10 order, the PWD Chief Engineer deputed a team to inspect the school.

The inspection team found that walls of classrooms had developed cracks and there was no lintel beam for doors and windows.

In most rooms, wooden beams were supporting the sandstone roof.

As the building was constructed in 1980, the team was told by the school staff that most of the wooden beams were worn out and sagging with not enough strength to carry the load of the roof anymore, giving rise to the risk of the roof falling any time.

Most of the classrooms had damaged flooring and additional brick columns have been provided for structural safety, but that is only a temporary arrangement.

In some rooms, reinforced brick concrete slabs were provided but now these have developed cracks.

In the school backyard, there is a vacant low-lying area stagnant with water. The pond thus created is dangerous to the school building as due to continuous seepage, the school wall may collapse. In some rooms, a portion of the roof had collapsed in the near past.

Agarwal said the area has high population density and very few schools and if the government constructs a multi-storeyed building in place of the existing structure, it will serve as many as 3,000 students.