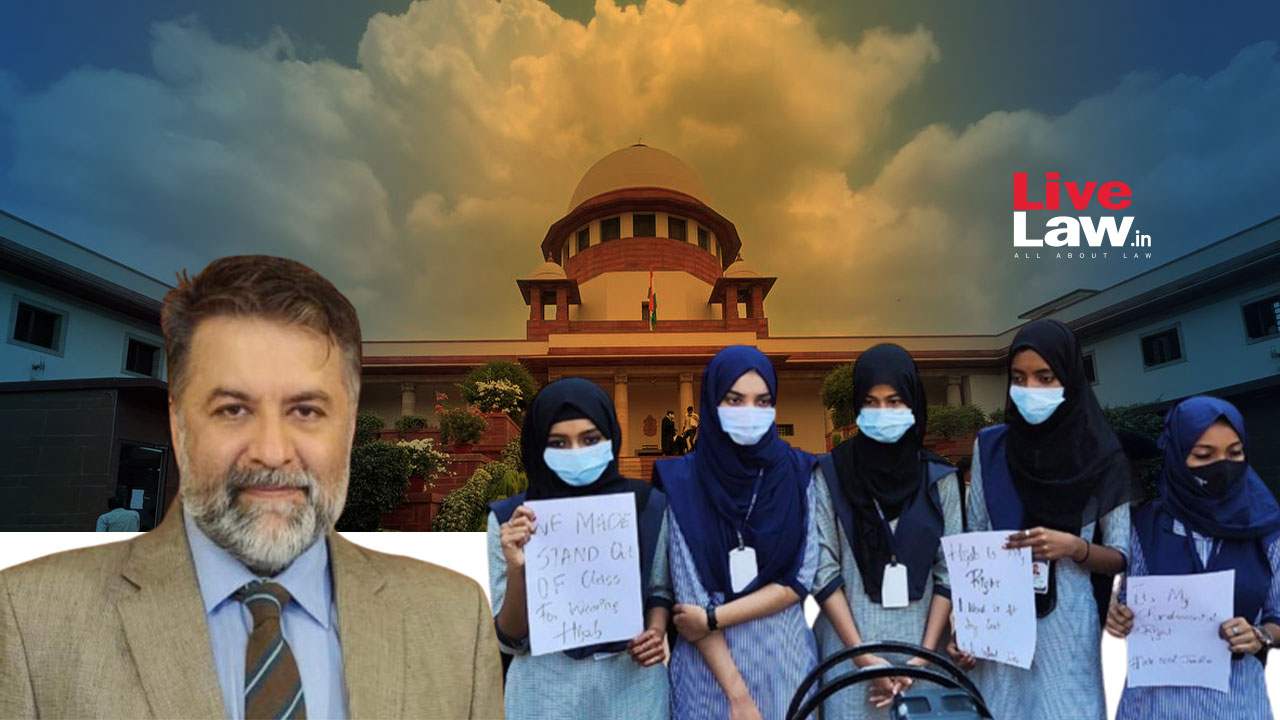 The Supreme Court today continued hearing in the batch of petitions challenging the Karnataka High Court's judgment which upheld the ban on wearing hijab by Muslim girl students in some schools and colleges in the State. Today was the fifth day of hearing by bench comprising Justices Hemant Gupta and Sudhanshu Dhulia which heard Senior Advocate Aditya Sondhi appearing for an...

The Supreme Court today continued hearing in the batch of petitions challenging the Karnataka High Court's judgment which upheld the ban on wearing hijab by Muslim girl students in some schools and colleges in the State.

Sondhi has relied on a Nigerian Supreme Court decision which held that the prescription against wearing hijab in schools is illegal.

He also argued that the impugned Karnataka High Court decision forces Muslim girl students to make a choice between right to freedom of religion and right to education, and is a case of "indirect discrimination" against them.

The State has argued that the GO prohibiting wearing hijab in educational institutions is "innocuous".

Sondhi however raised the issue of indirect discrimination, a principle recognized by the Supreme Court in Lt Col Nitisha vs. Union of India (permanent commission for women case).

"This was the case related to right of women for permanent commission for India. In that context, the Court held that what appears as innocuous and neutral may have the effect of indirectly discriminating a group and if so, it will be frowned upon by the Court," he said.

Sondhi cited Greek writer Aesop's fable about serving soup on a shallow bowl to a fox and a stork. "Though shallow bowl is seemingly neutral, the stork can't have the soup because of the long beak. So, seemingly neutral measures can have greater adverse impact on certain categories," he argued.

This example was also cited by Senior Advocate Huzefa Ahmadi in his arguments.

Sondhi referred to Sachar Committee report which he said concluded that Muslim women were facing discrimination due to practices of wearing hijab, burka.

He also sought to present a PUCL report before the Court to show the purported adverse effect of the High Court's decision on Muslim girls attending schools and colleges.

"In effect, many girls have been forced to make a choice, and they are forced out of education…we are dealing with students who might perhaps be first learners in the family. We have to keep in mind the socio-economic background," Sondhi submitted.

He argued that the intra-faith differences inasmuch as some Muslim girls do not wear hijab, cannot be a ground to restrain those who wear one. In this regard, Sondhi referred to the National Education Policy which he said emphasises on "inclusive education'.

Sondhi referred to a recent judgment of the Supreme Court of Nigeria in Lagos State Govt. and Ors v. Asiyat Abdul Kareem, which held that the prescription against wearing hijab in schools is illegal.

In this case, the State of Nigeria had imposed a ban on wearing hijab except on religious days. The country's Supreme Court reversed it by a 5:2 majority.

Sondhi submitted that the majority judgment held that nothing was shown to establish that wearing of Hijab will violate the fundamental rights of others and will lead to chaos or disunity.

"The Court must put the question to the State what public order dimension arises in this case. On facts, it has been shown that students have been wearing hijab for long. The burden on showing the restriction to be reasonable is on the State. Once the students show that they have a right, the burden shifts to the state to justify the restriction."

Also, the State can't burden a citizen to choose between two fundamental rights.  "A citizen must not be burdened with choosing between two rights. That is the predicament which the girls are facing", he argued to highlight that the judgment presented the students with a Hobson's choice, forcing them to choose between religion and education.

He pointed out that the whereas the Karnataka High Court declined the right to wear hijab, in the same vein, it recognized the "cultural right" of Kodavas to wear fire arms.

Sondhi was referring to a division bench judgment of the High Court in Capt. Chetan Y K (Retd) And Union of India where it was held that the restrictions under Arms Act will not restrict the customary rights of Kodavas.

In the previous hearings before the Apex Court, submissions by Senior Advocate Devadatt Kamat for petitioners pertained to Article 25 of the Indian Constitution, application of the Heckler's Veto in India, bonafide practice versus belligerent display of religion, difference between freedom of conscience and religion and; whether the Government Order was administratively sound.

Advocate Nizam Pasha for the Petitioners submitted that the High Court had misinterpreted Islamic verses to hold that Hijab was not mandatory.

Senior Advocate Yusuf Mucchala appearing for the Petitioners produced certain documents from Govt records to show that the right of education of Muslim girls is affected because their cultural and religious rights are not accepted. He argued that the High Court should not have entered into the issue of essential religious practice as the question was relating to an individual's fundamental right. Mucchala argued that Court should not embark upon the task of interpreting Quran and should not pick up just one view.

The bench has also raised several queries like whether religious clothing can be worn in a government run institution in a secular country. The bench also asked the counsels whether if it is held that freedom of expression includes the freedom to dress, would it also include the freedom to undress?