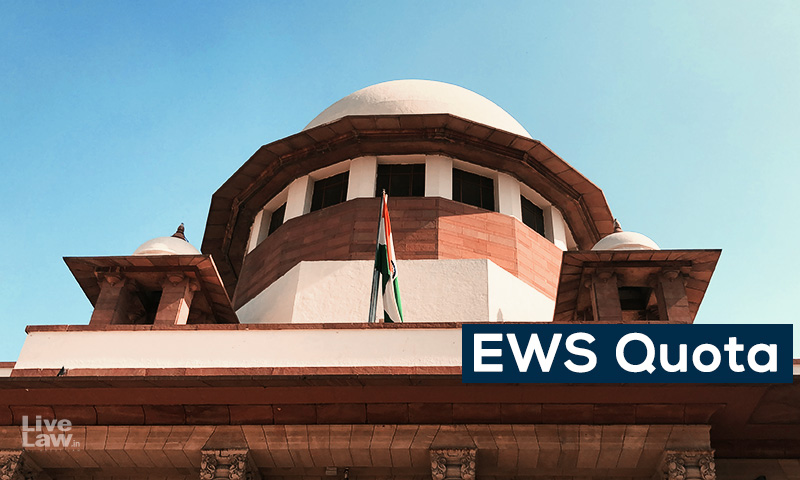 The Supreme Court judgment in Maratha Quota cases reiterated the principle of 50% ceiling limit for reservations and rejected the plea to revisit the 9-judge bench judgment in Indira Sawhney case which had laid down this ceiling limit.

Soon after the Supreme Court struck down the Maratha quota by saying that there were no exceptional circumstances to exceed the 50% ceiling limit, discussions started in public platforms speculating the impact of this ruling on the validity of the quota for Economically Weaker Sections.

So, will the affirmation of 50% ceiling limit by a 5-judge Constitution Bench in the Maratha quota case impact the EWS quota to the extent it exceeds the ceiling limit? It may be recalled that a 3-judge bench of the Supreme Court, in August 2020, had referred the pleas challenging EWS quota to a larger bench, and one of the questions related to the 50% ceiling limit.

However, the bench refrained from making any observation on this contention based on EWS quota.

"Shri Rohtagi has further submitted that the issue pertaining to 103rd Constitutional Amendment has been referred to a larger Bench in W.P. (Civil) No.55 of 2019, Janhit Abhiyan versus Union of India. In view of above, We refrain ourselves from making any observation regarding effect and consequence of 103rd Constitutional Amendment.", the lead judgment authored by Justice Ashok Bhushan said.

Interestingly, Justice Bhushan had orally remarked (during the hearing) that all reservations may go and only EWS may remain. He had said that these were policy matters and were in the domain of the Parliament as well as the Legislature.

In Maratha case judgment, the Supreme Court reiterated that reservation under Article 16(4) [and Article 15(4)] should not exceed 50% except when there are extraordinary circumstances. The Court rejected the plea to revisit Indra Sawhney or to refer the same to a larger Bench. According to Justice Ashok Bhushan, to change the 50% limit is to have a society which is not founded on equality but based on caste rule.

Justice S. Ravindra Bhat, who wrote a concurring judgment, observed that to dilute the 50% benchmark further would be to effectively destroy the guarantee of equality, especially the right not to be discriminated against on the grounds of caste. The court observed that the percentage of 50% has been arrived at on the principle of reasonability and achieves equality as enshrined by Article 14 of which Articles 15 and 16 are facets.

In Paragraph 810 of Indra Sawhney judgment it was observed thus: "While 50% shall be the rule, it is necessary not to put out of consideration certain extraordinary situations inherent in the great diversity of this country and the people. It might happen that in far flung and remote areas the population inhabiting those areas might, on account of their being out of the mainstream of national life and in view of conditions peculiar to and characteristical to them, need to be treated in a different way, some relaxation in this strict rule may become imperative. In doing so, extreme caution is to be exercised and a special case made out."

The Court struck down the Maratha reservation observing that no extraordinary circumstances were made out in granting separate reservation of Maratha Community by exceeding the 50 percent ceiling limit of reservation.

The Constitution (One Hundred and Twenty Fourth Amendment) Bill, 2019 was passed by the Parliament on 9th January 2019. The Statement of Objects and Reasons of the Bill, stated that the amendment intended to ensure economically weaker sections of citizens get a fair chance of receiving higher education and participation in employment in the service of the State.

The contention of the petitioners in Janhit Abhiyan is that the 103rd Amendment breaches the 50% ceiling limit and runs contrary to the dictum laid down in Indra Sawhney. According to them, the equality code of the Constitution ought to be strictly observed and breach of 50% ceiling limit should not be allowed.

Centre defended the Amendment contending that the limit of 50% of reservation is only applicable to reservations made under Articles 15(4), 15(5) and 16(4) and does not apply to Article 15(6). To secure justice to all citizens based on social, economic and political, as referred to in the Preamble, it is always open for the State to bring a constitutional amendment so as to promote such economically weaker sections, in relation to admissions to educational institutions and also in making appointments in public services, it was contended.  The Centre further submitted that, though ordinarily 50% is the rule but same will not prevent to amend the Constitution itself in view of the existing special circumstances to uplift the members of the society belonging to economically weaker sections.

Taking note of these contentions, the three judge bench referred the matter to Constitution Bench.

Impact on Challenge Against EWS Reservation

If the Constitution Bench which hears the challenge against 103rd Amendment decides to go with the logic in Maratha Quota judgment (that 50% limit cannot be breached) , it will have to decide the following issues:

2) Whether Indra Sawhney judgment prohibits a Constitutional amendment  in view of the existing special circumstances to uplift the members of the society belonging to economically weaker sections.?

2) Whether 50% Ceiling Limit is applicable only to caste based reservation and not economic reservation ? (since according to judgment in Maratha Quota cases, 50% limit cannot be breached as it will lead to a society which is not founded on equality but based on caste rule)

3) Whether there exists special circumstances to provide reservations to the members of the society belonging to economically weaker sections?

It is necessary to keep one point in mind - that the Supreme Court did not hold in the Maratha quota case that 50% ceiling limit cannot be crossed at all. It can be crossed if there are "exceptional circumstances". The Maratha quota was struck down because the Court could not find any such "exceptional circumstances" to justify the crossing of ceiling limit.

So the question could be if there are exceptional circumstances to justify EWS quota.