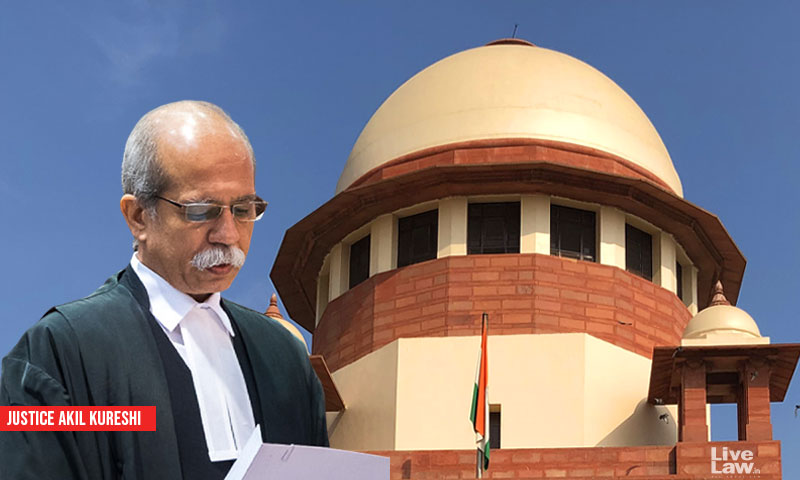 x
The refusal to elevate Justice Kureshi to the Supreme Court, which he duly deserves, before his retirement as High Court judge will send a distressing message.

Justice Akil Kureshi's absence in the present list of nine new appointees to the Supreme Court has become a raging point of discussion. It was in 2018 that the controversy relating to Justice Kureshi first surfaced. While he was about to be the Acting Chief Justice of the Gujarat High Court, as its senior most judge following the elevation of the then Chief Justice Subhash Reddy, he...

Justice Akil Kureshi's absence in the present list of nine new appointees to the Supreme Court has become a raging point of discussion. It was in 2018 that the controversy relating to Justice Kureshi first surfaced. While he was about to be the Acting Chief Justice of the Gujarat High Court, as its senior most judge following the elevation of the then Chief Justice Subhash Reddy, he was transferred to the Bombay High Court, where he was to take a lower seniority position of number five among the judges.  The transfer faced vehement opposition from the Gujarat High Court Advocates Association, which stoutly affirmed the integrity and capability of Justice Kureshi, and denounced his transfer as wholly unwarranted.

In May 2019, the Supreme Court collegium recommended the elevation of Justice Kureshi as the Chief Justice of the Madhya Pradesh High Court. However, the Central Government selectively withheld approval for Justice Kureshi's elevation, although the other names recommended in the very same list(Justices D N Patel, V Ramasubramanian and R S Chauhan were recommended as Chief Justices of High Courts of Delhi, Himachal Pradesh and Telangana respectively)were approved by it.

This led the Gujarat High Court Advocates Association to file a writ petition in the Supreme Court seeking to direct the Centre to act upon the recommendation for Justice Kureshi's elevation. A battery of senior advocates ranging from Fali S Nariman, Arvind Datar, Dushyant Dave, Yatin Oza, Mihir Thakore, Percy Kavina etc.,appeared for the GHCAA, pleading the case for the elevation of Justice Kureshi. However, the Centre kept on dragging its feet, without revealing any reason. Four months after the recommendation, in September 2019, the Supreme Court collegium made a different proposal to elevate Justice Kureshi to Tripura High Court(with a strength of 4 judges) instead of Madhya Pradesh High Court(with a strength of 53 judges over three regional benches), following certain communications from the Ministry of Justice. The modified proposal, which looked like a 'settlement' of sorts, was accepted by the Centre, and Justice Kureshi has been the post of Tripura High Court's Chief Justice since then. On the judicial side, the Court disposed off GHCAA's petition, without addressing the issue of laying down a time line for the Centre to act on collegium recommendations.

Since the reasons behind these decisions are not revealed to the public, one is forced to fall back upon speculations. There is a widespread belief that Justice Kureshi is a persona non grata for the Central Government due to some judgments given by him. In 2010, J Kureshi had remanded BJP leader Amit Shah, who was then junior Home Minister of Gujarat, to two days Police Custody in relation to the Sohrabuddin encounter killing case. Justice Kureshi's 2012 decision upholding the the Governor's appointment of (Retd) Justice RA Mehta as Lokayukta was a set back to the state government.

In 2016, there was an attempt to cause his recusal from hearing the appeal against the conviction of Maya Kodnani(who was a minister in the Gujarat Government) and few others in the Naroda Patiya massacre case, when a senior lawyer related to Justice Kureshi entered appearance for one of the parties in the last minute and sought his recusal. "When the appearance is made by the senior advocate at late a stage, we wonder would it not have been better if the advocate had recused rather than to request the court to do so", Justice Kureshi stated in the order of recusal. He expressed his anguish at the episode by saying "It is very painful. We will not say anything but it tarnishes the image of the institution and confidence of people… this should not have happened."

In May 2018, a bench headed by him upheld the conviction of 19 Accused persons in the post-Godhra riots in Oad, where 23 people including women and children were burnt alive by a mob in March 2002. These phenomena which we often describe as communal frenzy turn perfectly normal human beings momentarily into murderous monsters leaving nothing but trail of death and destruction for the victims and his own family alike", Justice Kureshi stated in his judgment.

While making the latest recommendations, the Supreme Court collegium picked up the senior most High Court Chief Justice AS Oka but omitted the next senior Chief Justice AS Kureshi. There are some reports that the reason for the stalling of appointments to the Supreme Court for nearly two years after September 2019 was due to Justice Nariman's insistence that Justice Kureshi should be elevated. It is noteworthy that the present list of nine names got cleared by the 5-member collegium in the week following Justice Nariman's retirement.

This time, the Collegium's focus appeared to have been more on diversity than seniority, as four puisne judges - two women and two persons from marginalized communities- have been elevated. But this still does not explain the exclusion of Justice Kureshi, as there is one more unfilled vacancy. If the collegium chooses not to stand by the judges and opts to toe the executive line in judicial appointments, there can't be a bigger threat to judicial independence. Such instances render the striking down of the NJAC and retaining the power of judicial appointments to the judiciary itself in the name of judicial independence meaningless.

The merit of Justice Kureshi is not disputed. A bar standing by the judge is the strongest testimony for the integrity and capability of a judge. The home bar of Justice Kureshi, the Gujarat High Court Advocates Association, has always rallied behind him, and has even gone to the extent of filing a petition in the Supreme Court for his elevation.

At the Tripura High Court, Justice Kureshi has delivered notable judgments on civil liberties, protecting persons from arrests over social media posts critical of the government. In a recent judgment on Section 295A IPC, he observed that careless insults to religion without any deliberate or malicious intention to outrage the religious feelings of a class would not be a penal offence. To recount some notable actions taken by him as the Chief Justice of Tripura High Court - took suo motu cognizance of the reports about the trafficking of a minor girl, ordered  suo motu SIT probe into the incident of a couple killing themselves after their leaked videos came in public domain, monitored the handling of COVID management in the state and vaccine distribution; intervened in the incident of a District Magistrate abusing authority to prevent a marriage party; issued directions to ensure the protection of children in orphanages during COVID; passed directions to fill up vacancy in district judiciary.

The dissenting judgment given by him in Gujarat High Court in the Goolrokh Gupta case is notable for its emphasis on secularism and personal liberty. The issue is this case was whether a Parsi woman would cease to be Parsi on marrying a non-Parsi man. While the majority held that marriage of a non-Parsi would mean that the woman has renounced Parsi religion, Justice Kureshi dissented, "In a secular State and the Constitutional philosophy that we have adopted, it would be impossible to imagine that two persons belonging to different religions would not be permitted to solemnize a valid marriage unless, atleast one of them is prepared to renounce his or her religion and accept conversion." The issue is now before the Constitution Bench of the Supreme Court.
Demoralizing message to upright judges

Justice Kureshi is set to retire on March 7, 2022 as High Court judge. Before that, one more vacancy is set to arise in the Supreme Court, with the retirement of Justice R Subhash Reddy on January 4, 2022.

The refusal to elevate Justice Kureshi to the Supreme Court, which he duly deserves, before his retirement as High Court judge will send a distressing message that judges who keep a check on the executive in accordance with their constitutional duties will be sidelined.

This is not the first instance of the collegium failing to protect the judges from executive overreach. In 2017, Justice Jayant Patel had to resign after he was denied his due elevation. The speculations were that Justice Patel was paying the price for directing a CBI investigation into the controversial Ishrat Jahan fake encounter case . It was during his monitoring that the CBI filed a charge sheet in the case naming top officials of the IB and Gujarat police. His transfer was widely condemned by several senior members of the Bar, with several Bar Associations passing resolutions against it. Senior Advocate Dushyant Dave commented that Justice Patel was victimised for not buckling under the pressure of Government.

Before concluding, it is apposite to refer to a quote from the NJAC judgment :

"The expectation from the judiciary, to safeguard the rights of the citizens of this country, can only be ensured, by keeping it absolutely insulated and independent, from the other organs of governance"