What Made Justice R.F. Nariman Overrule The Judgements He Appeared As Counsel For Losing Side? (Part-I) 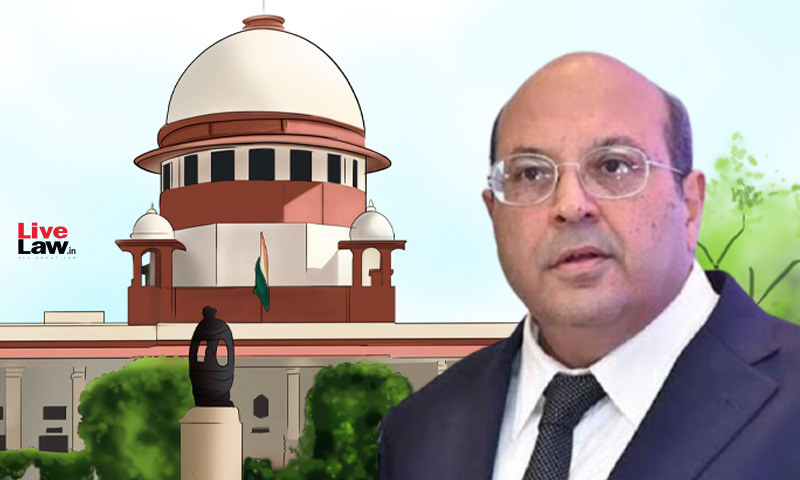 The law is reformed not only by the Legislature but also by the Courts through the process of dynamic interpretations. This has been proved many times by Justice R.F. Nariman, through his interpretation of Constitutional and statutory provisions in his short tenure of 2,594 days (7 Years). In his tenure, he has authored 270 judgements. Some of his renowned judgements are...

The law is reformed not only by the Legislature but also by the Courts through the process of dynamic interpretations. This has been proved many times by Justice R.F. Nariman, through his interpretation of Constitutional and statutory provisions in his short tenure of 2,594 days (7 Years). In his tenure, he has authored 270 judgements. Some of his renowned judgements are TripleTalaq, Constitutionalty of Section 377 IPC, Fundamental Right to Privacy, Decriminalisation of Adultery, Reservation in Promotion, Electoral Disqualification on Framing of Criminal Charges, and Sabarimala Temple Entry, etc.

State Of A.P. V. Mcdowell & Co. [This case rejected the arguments of Justice R.F. Nariman that Statute can be struck down merely on the ground of 'arbitrariness' under Article 14]

Petitioners who were the manufacturers of liquors in the State of Andhra Pradesh challenged the constitutionality of the Andhra Pradesh (Amendment) Act 35 of 1995 on the grounds of violation of fundamental rights and legislative incompetence.

In order to appreciate the submissions made by Justice R.F. Nariman (the then Counsel for Petitioner), it is essential to adumbrate the background of the case. The legislature in the State passed Andhra Pradesh Prohibition Acts, 1995 (Main Act) to introduce Prohibition of the Sale and Consumption of intoxicating liquors in the State of Andhra Pradesh. Section 7 of the Main Act was the main provision that prohibited selling, buying, and consumption of liquor within the State. Sections 15 and 16 of the Main Act provided for exemptions to certain persons from selling and consuming liquor within the State.

The Governor of Andhra Pradesh issued an Ordinance amending certain provisions of the Main Act. It was given effect from the date of the commencement of the Main Act. One of the amended provisions was Section 2 which now included the expression "manufacture" within the ambit of the prohibition envisaged by it. Then the Legislature of the State, on October 12, 1995, passed Andhra Pradesh Prohibition (Amendment) Act, 1995 in terms of Ordinance with minor modifications.

Since, as per the new Amendment Act, 1995 the manufacturers of liquors were not allowed to manufacture the liquor. There were few exemptions for selling and buying the liquors as per Section 7, however, no exemption was provided for manufacturing the liquor. Thus, they filed a Writ Petition before the Supreme Court challenging the constitutionality of the Amendment Act. One of the primary contentions put forth by the counsel of the Petitioner being Justice R.F. Nariman was that the complete prohibition of manufacture of liquors is "arbitrary" and violates Article 14 of the Constitution of India.

Justice R.F. Nariman then Counsel, submitted that a large number of persons who fall within the exempted categories are allowed to consume liquors in the State of Andhra Pradesh, the total prohibition of manufacture and production of these liquors is "arbitrary" and the amending Act is liable to be struck down on this ground alone.

The main contention postulated by Justice R.F. Nariman was that even if the requisite criteria of reasonable classification is fulfilled, then also the Statute can be struck down if it is 'arbitrary'. It was contended that discrimination is not the pre-condition for showing the violation of Article 14.

However, the contentions of the Justice R.F. Nariman were rejected by the Court. The Supreme Court, in order to negativize his contentions, held that India does not have a 'substantive due process' clause like the U.S.A, thus, Statute cannot be struck down merely on the ground of 'arbitrariness' or 'unreasonableness'. Court held that any statute can be struck down only if it is violative of the equality clause/equal protection clause enshrined under Article 14. Only if the Statute is challenged as being violative of Article 19 (1) (a) to (g), then it may be struck down if it is 'arbitrary' or 'unreasonable'.

It was further held that, that discrimination is essential for the violation of equality under Article 14 and statute cannot be struck down merely based on 'arbitrariness'. Consequently, the constitutionality of the Andhra Pradesh (Amendment) Act 35 of 1995 was upheld.

Shayara Bano Vs Union Of India, [This case held that Statute can be struck down merely on the ground of 'arbitrariness' under Article 14]

In this case, the centripetal question was that whether Muslim Personal Law (Sharait) Application Act, 1937, insofar as it seeks to enforce Triple Talaq, violates the fundamental rights and is liable to be struck down?

Justice R.F. Nariman penned down the detailed judgement, after scanning the anatomy of old and new judgements, striking down the said Shariat Act, 1937. One of the prominent reasons given by Justice R.F. Nariman was that Shariat Act, 1937 is 'arbitrary' in nature and thus, on this ground alone, it is liable to be struck down, as it cannot pass the test of Article 14 of the Constitution of India.

Justice R.F. Nariman began his analysis from the dissenting opinion of Subba Rao, J. in Lachhman Das v. State of Punjab, (1963) 2 SCR 353 at 395 where his lordship stated that overemphasis on the doctrine of classification may gradually deprive the Article 14 of its glorious content.

Further, he pointed that the 'rule of law' has direct reference to Article 14. Reliance was placed on the Indira Gandhiv. Raj Narain, 1975 Supp SCC 1 specifically on the opinion of Chandrachud, J. who referred to Article 14 and stated that "Article 329-A of the Constitution is an outright negation of the right of equality conferred by Article 14".

Justice R.F. Nariman in Para No. 37 of his opinion Considered the Raj Narain judgement an early application of the doctrine of 'arbitrariness'. Then he relied on the passage Bhagwati, J., in E.P.Royappa v. State of T.N., (1974) 4 SCC 3 (at page 38) which had held that "equality is antithetic to arbitrariness. In fact equality and arbitrariness are sworn enemies…".

Nariman, J. after placing reliance on the ManekaGandhi v. Union of India, (1978) 1 SCC 248 held that fundamental rights cannot be read in 'watertight compartment' and they must fertilise each other. In specific, it pointed out that "Equality is a dynamic concept with many aspects and dimensions and it cannot be imprisoned within traditional and doctrinaire limits…"

In order to fortify the point that legislation can be negated on the basis of 'arbitrariness', strong support was taken from the case of Ajay Hasia v. Khalid MujibSehravardi, (1981) 1 SCC 722.

Then, the only judgement which created the problem in the evolution of the 'doctrine of arbitrariness' was the case of State of A.P. v. McDowell & Co. [(1996) 3 SCC 709] where Justice R.F. Nariman appeared for losing side and argued that statute can be struck down only on the ground of arbitrariness under Article 14.

"43. Close upon the heels of this judgment, a discordant note was struck in State of A.P. v. McDowell & Co., (1996) 3 SCC 709. Another three Judge Bench, in repelling an argument based on the arbitrariness facet of Article 14…"

Nariman, J. held that the judgement of McDowell & Co. did not follow the law laid down in Ajay Hasia (Supra) and Lakshmanan(Supra). He pointed out that:

Nariman, J. also took the support of one more judgement penned down by him in the case of Mohd. Arif v. Supreme Court of India, (2014) 9 SCC 737 which held that "…the wheel has turned full circle. Substantive due process is now to be applied to the fundamental right to life and liberty." He then stated that McDowell & Co. did not even follow the law laid down in Maneka Gandhi case. He held that:

"44. Clearly, therefore, the three Judge Bench has not noticed Maneka Gandhi (supra) cited in Mohd. Arif (supra) to show that the wheel has turned full circle and substantive due process is part of Article 21 as it is to be read with Articles 14 and 19."

Thus, after detailed analysis, it was held that McDowell & Co. is not a good law to be followed anymore. The relevant para is extracted hereinbelow:

"45. The thread of reasonableness runs through the entire fundamental rights Chapter. What is manifestly arbitrary is obviously unreasonable and being contrary to the rule of law, would violate Article 14. Further, there is an apparent contradiction in the three Judges' Bench decision in McDowell (supra) when it is said that a constitutional challenge can succeed on the ground that a law is "disproportionate, excessive or unreasonable", yet such challenge would fail on the very ground of the law being "unreasonable, unnecessary or unwarranted."

It is to be noted that that Justice R.F. Nariman, in three judgements authored by him namely Mohd. Arif v. Supreme Court of India, Shayara Bano vs Union of India, and Justice K.S. Puttaswamy (Retd.),& Another v. Union of India & Others, has held that now "Substantive due process" is part of Article 21 and statute may be struck down merely on the ground of 'arbitrariness'. However, other judges in Justice K.S. Puttaswamy's case agreed with the view that law may be struck down on the basis of 'arbitrariness' but distinguished their views in relation to the applicability of the doctrine of "substantive due process'. D.Y. Chandachud, J. in the judgement written by him in Justice K.S. Puttaswamy's case held that:

Thus, it is in the coming time to see, that how the future larger benches of the Supreme Court takes this issue. Ergo, the law in relation to manifest arbitrariness is clear but law concerning the applicability of "Substantive Due Process" in India has again raised the questions after the D.Y. Chandachud, J.'s judgement in Justice K.S. Puttaswamy's case.

The author is an advocate practicing at the Supreme Court of India, views are personal.