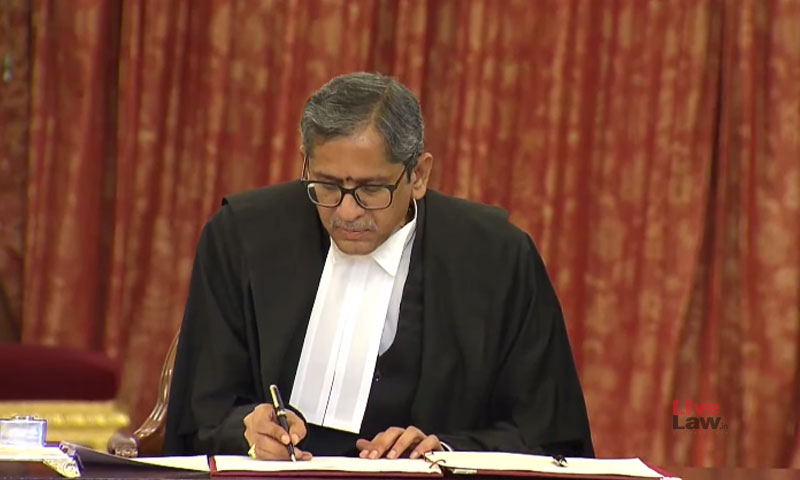 x
CJI Ramana gives an impression that he is trying to do whatever possible under the heavy weight of a majoritarian government.

When Justice NV Ramana entered the first court as the 48th Chief Justice of India exactly a year ago - April 26, 2021 - he must have felt the weight of public gaze on him. The judiciary has been under increased public scrutiny over the past few years, with mounting criticism from several quarters about its refusal to review several questionable executive actions having major impact on...

When Justice NV Ramana entered the first court as the 48th Chief Justice of India exactly a year ago - April 26, 2021 - he must have felt the weight of public gaze on him. The judiciary has been under increased public scrutiny over the past few years, with mounting criticism from several quarters about its refusal to review several questionable executive actions having major impact on citizens' fundamental rights. However, during the term of CJI Ramana so far, the Supreme Court has shown comparatively more willingness to keep a check on the executive. It was not like the State could get away by making audacious claims like "no migrants are walking on the street". The State was at least called upon to give legal justifications for its actions.

One witnessed this in the Pegasus spyware case, where a bench led by the CJI discarded the hyperbole of "national security" raised by the Central Government. The bench also adversely commented on the Centre's refusal to make a clear statement as to whether the spyware was used by it or not.

In the Lakhimpur Kheri case, where Union Minister Ajay Mishra's son Ashish Mishra is accused of killing farmers, the investigation came on the right track only after a proactive intervention made by the CJI's bench. The Court reconstituted the Special Investigation Team by including senior officers and appointed a retired High Court judge to monitor the probe. Last week, the Court cancelled the bail granted to Ashish Mishra, after calling out the State of UP's refusal to challenge the bail order despite a recommendation to that effect by the judge monitoring the SIT probe.

In the matters relating to Tribunal vacancies and Delhi air pollution, the Court showed considerable degree of sternness. Last week, the CJI came to the relief of Jahangirpuri residents by passing a status quo order immediately when an oral mentioning of the matter was made.

At the same time, it is also to be noted that several important constitutional matters related to the abolition of the special status of Jammu and Kashmir under Article 370, Citizenship Amendment Act and electoral bonds have not been listed during the CJI Ramana's term.  Last month, the CJI turned down a plea for urgent listing of the appeals against the Karnataka High Court verdict upholding hijab ban in schools and colleges. "Exams have nothing to do with this issue", the CJI said when the petitioner's counsel said that Muslim students won't be able to attend exams.

When the electoral bonds matter was mentioned by Advocate Prashant Bhushan on April 5, the CJI said "If it was not because of COVID, I would have heard this. Let us see, we will take this up". This matter is also yet to be listed.

Last year, the CJI caused excitement among civil liberty activists by openly voicing his criticism of the sedition law.

"Is it still necessary to retain this colonial law which the British used to suppress Gandhi, Tilak etc., even after 75 years of independence?", the CJI asked the Attorney General for India while admitting a petition challenging Section 124A of the Indian Penal Code. This petition is also awaiting a judicial decision.

Likewise, the CJI has criticized the Tribunals Reforms Act 2021 passed by the Parliament for overturning judicial decisions. However, a decision on the validity of the Act is awaited.

A remarkable feature of CJI Ramana's tenure would be the special push given for filling judicial vacancies. In August 2021, breaking a deadlock of nearly 2 years, nine new appointments were made to the Supreme Court (highest ever in one go), with 3 women judges (another record). One of the new appointees, Justice B V Nagarathna, is likely to be the first woman Chief Justice of India.

At the High Courts as well, record number of appointments were made.

"From day one, it has been my endeavour to fill judicial vacancies. In fact, my very first communication to the Chief Justices of the High Court was to request them to expedite the process of recommending names for elevation. Due to collective efforts at all levels, we could make considerable progress in the filling up of the judicial vacancies. After I assumed office, we made 180 recommendations so far, for appointments in High Courts. Out of this, 126 appointments were made. 54 proposals are awaiting approval by the government. The government has received nearly 100 proposals from various High Courts, which are yet to be transmitted to Supreme Court. I am hoping that the High Courts will expedite the process of sending the proposals to fill the remaining 212 vacancies".

However, the omission to elevate Justice Akil Kureshi to the Supreme Court, apparently due to the negative perception of the Central Government due to his orders adverse to the political establishment, will loom over the record of judicial appointments as an unredeemed debt. "So far there have been 48 Chief Justices of India. But when we talk of courage and sacrifice to uphold rights of citizens, we remember the one who should have but never did become the Chief Justice of India", Justice Kureshi had said on the occasion of his farewell as the CJ of the Rajasthan High Court.

The transfer of Chief Justice of Madras High Court Justice Sanjib Banerjee to Meghalaya High Court had also created a controversy last year, as many members of the Bar criticized the transfer, which came after Justice Banerjee passed a series of orders against the Central Government.

Increased public visibility of the CJI

CJI Ramana has delivered a number of public lectures on various important topics by travelling the length and breadth of the country on weekends and holidays. He has used the public platform to invite attention to pressing issues such as lack of judicial infrastructure, gender representation in judiciary, need to clear backlog vacancies, improvement of legal education standards etc. Another topic repeatedly highlighted by the CJI is the "Indianisation" of the judiciary, by removing the barriers for common man to access justice by simplifying procedures and court language. "By Indianisation, I mean moulding the Indian Judicial System for the benefit of the Indian populace.It is a multidimensional concept. It calls for inclusivity, providing access to people to participate in the proceedings, removal of language barrier, reforms in practice and procedure, development of infrastructure, filling up of vacancies, augmenting the strength of judiciary and so on",the CJI explained recently.

The CJI has also reiterated the importance of alternate dispute resolution mechanism and has repeatedly emphasized the need for a mandatory mediation in ordinary litigation.

The initiative launched by the CJI to ensure faster transmission of electronic copies of orders is also laudable. The CJI took this step after taking a suo motu case on the basis of a newspaper report about delay in release of prisoners despite being granted bail as the authorities were waiting for the physical copies of the order.

Having raised the aspirations of the people about the judiciary, one hopes that CJI Ramana will sustain the same through corresponding judicial actions in the remaining 4 months of his term. CJI Ramana gives an impression that he is trying to do whatever possible under the heavy weight of a majoritarian government.