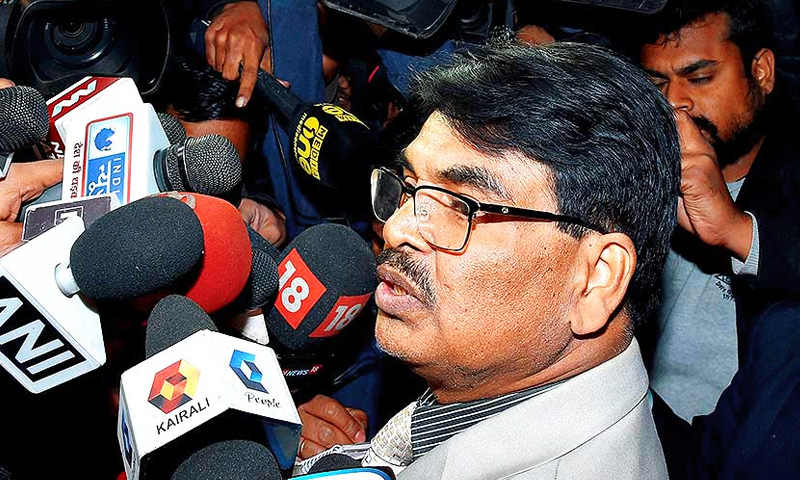 The Press Releases of the Chairman of the Bar Council of India, Manan Kumar Mishra, follow a common pattern –they are always aimed at stifling genuine criticism, and stalling reforms. With a series of ad-hominem attacks and labelling, the BCI Chairman ensures that any space for dialogue, introspection and critical analysis is erased. There is also an attempt to pass off these views...

The Press Releases of the Chairman of the Bar Council of India, Manan Kumar Mishra, follow a common pattern –they are always aimed at stifling genuine criticism, and stalling reforms. With a series of ad-hominem attacks and labelling, the BCI Chairman ensures that any space for dialogue, introspection and critical analysis is erased.

There is also an attempt to pass off these views as those of the legal community at large. Because, the Chairman always ensures that the press releases are accompanied with BCI logo and insignia, though there is no evidence of any collective deliberations having taken place within the Council before the issuance of these missives. Such an undemocratic approach signifies a mindset to use symbols of authority to terrorize dissenters into silence and submission.

The latest is the Press Release issued on Saturday, where Mr.Mishra termed the criticism of the Supreme Court as a 'nefarious attempt by disgruntled advocates and former judges'. As usual, one can find broad, sweeping and incendiary comments here also, sans any material or discussion.These 'press release episodes' always have the effect of pleasing the persons in power.

Inconsistency is another hallmark of the stands of BCI Chairman.

For long, Mr Mishra led BCI has been targeting SCBA and more particularly, its President, Senior Advocate Dushyant Dave for being "political". He has also earlier targeted Senior Advocates Kapil Sibal, Dr AM Singhvi and Vivek Tankha for politicizing the bar.

Interestingly, Mr Mishra has never shied away from declaring his political allegiance. Chairman Mishra's claim to fame was ironically a BCI event in Gandhinagar in 2014, to celebrate its 50 years of existence, where he extolled the then Gujarat CM Narendra Modi as "Mahatma Gandhi reborn".

In 2016, he sent a letter to Prime Minister Modi, showering him with encomiums. He began the letter eulogizing the PM with expressions like "My Lord!", "You are our guardian, our guide, "the most efficient and able leader of the world", "the most able and efficient leadership of our beloved Narendra Modiji".

Further, the letter stated that the PM has dominion over the apex regulatory body-- "Bar Council of India is your institution". Antithetically, the letter then vowed that "legal fraternity cannot compromise with its independence".

Over and above, he proclaimed in the letter how he had joined the BJP in 2013 (switching from Congress), and how all the bar councils under his able leadership had supported PM Modi in his election :

"Bar Council of India is chaired by me for the last 5 years. I am a strong supporter of your goodself. In 2003, I was the Chairman, I joined BJP because I was very much impressed with your leadership, your views and your ideas. Though some of the leaders of BJP do not like me, but since I know that my leader is the most able leader of the world, I don't care for others."

Interestingly, he had contested Bihar assembly elections on Congress ticket in 2010.

Just a few days before the 2014 election, Mr Mishra had camped in Varanasi for a week to campaign for the election. He even pledged the support of 1.7 million advocates to BJP, as if the BCI Chairman is the lord of the minds of all advocates.

In a press conference at the BJP office in Varanasi, he had said, "I pledge my support to Narendra Modi's bid to become India's next prime minister. I'm speaking in my capacity as a representative of 1.7 million lawyers across the country."

In 2019, Mishra made a political appeal using the BCI platform, saying that he will urge the lawyers to not vote for BJP, if the welfare demands are not met.

The BCI also created a needless controversy recently by staying the decision of SCBA to suspend Ashok Arora from the post of Secretary. The political undercurrents might perhaps explain the BCI's unusual move to interfere with the internal disciplinary action of a bar association.

Another example of his inconsistency is the appeal made to the former CJI Dipak Misra to not take up post-retirement assignments. In 2018, shortly before former Chief Justice of India Dipak Mishra's retirement, the BCI in a resolution had publicly urged him not to accept any assignment or work from the government post-retirement "in the interest of the independence and integrity of the judiciary".

Changing its stance conveniently, Bar Council came to Mr. Gogoi's defence when he was drawing flak for accepting the nomination to Rajya Sabha, within six months of his retirement as the CJI. Forgetting the earlier appeals for preserving judicial independence, the Chairman lauded the government's step and attacked the criticism as "unwarranted and premature".

In a statement on the issue, BCI Chairman had said:

"We hail the novel initiative taken by the President of India in nominating Ranjan Gogoi, former Chief Justice of India, as a Member of Parliament (Rajya Sabha). We see it as a bridge between the Legislature and Judiciary. This, in fact, would be an ideal opportunity to portray the first-hand views of the judiciary before the lawmakers and vice versa."

Mr Mishra has drawn ire of women lawyers and activists on many occasions for his remarks. BCI under his leadership organized a silent protest as part of the "MenToo Movement after allegations of sexual harassment were leveled against the former Chief Justice of India Ranjan Gogoi. A brief statement by BCI Chairman had stated:

"The common lawyers who have trust in the institution should support the men too movement and should assemble at India Gate to show their solidarity with the C.J.I. Mr. Ranjan Gogoi."

Without uttering a single word about the apparent lack of transparency and fairness in the inquiry process adopted by the SC after the surfacing of the allegations, Mr. Mishra indulged in a pathetic attempt of 'victim-shaming' and 'victim-blaming'.

Issuing a statement expressing his support for Mr. Gogoi, Mr Mishra questioned the complainant's motives and lauded the inquiry committee's verdict in the matter as "totally just and proper". Furthermore, he had called for amendments in the laws concerning sexual offences including changes to the rape law under section 376 of the Indian Penal Code. Amusingly, he had also urged that the statement by the prosecutrix in sexual offences should not be taken at face value to avoid malicious cases.

"The oral testimony of the prosecutrix is enough to convict under Section 354 and 376 IPC, Why? We are not in the 18th century, that no one can presume that a female will never make such allegations to falsely implicate her enemies. We have great respect for our women. But time has changed, we must keep in mind………the statement said.

The letter further made a demand of imposing a limitation period to report on sexual offences, claiming that a delay in reporting such cases "normally very much proves and establishes that the so-called prosecutrix was/is a liar or was a consenting party".

Over 200 women lawyers endorsed a letter slamming Chairman for his alleged anti-women comments in the matter.

"We have lately watched with deep concern, as you have made several reprehensible public statements which demonstrate a serious lack of principled leadership of the Bar, and a glaring lack of commitment to basic constitutional values of equality and non-discrimination," the letter said.

A group of law students slammed Mishra by saying "You choose to protect this male-centric edifice by not questioning it, when questions need to be asked, however uncomfortable these may be".

Mr Mishra in an interview with a television channel went on to say, "What happened in Kathua was indeed gruesome. But we should also know the entire legal fraternity in Jammu is on strike, what circumstances led to the strike is a pertinent question to ask. We must inquire as to why they are on the streets and why they are not satisfied with the police investigation."

Later, BCI, by giving a clean chit to Jammu and Kathua Bar Associations, indirectly supported the lawyers who called for a bandh in support of the accused.

But the Chairman had no comments to make when six out of seven accused were found guilty by the trial court in June 2019.

The controversial Citizenship Amendment Act 2019 raises some pertinent constitutional questions, and over 160 petitions are pending in the SC challenging the same.

While the country was caught up within a raging protests against the CAA, Mr Mishra, affirming his political commitment to the ruling party at the Centre, condescendingly said that the protests were carried out by "illiterate ignorant mass" who were being "misled''. He further urged the lawyers, bar associations, State Bar Councils, students associations of NLUS and all law colleges to ensure that "law and order" is maintained throughout the country.

While Mr.Mishra is entitled to have his own personal views about the legislation, he does not have the authority to use the office of BCI Chairman to air views belittling the protests against CAA. In fact, a BCI member came out openly against the Chairman for unilaterally issuing a statement in support of the CAA, when the issue was highly contentious.

Nearly, 1,000 lawyers disassociated themselves from the Chairman's statement stating that it did not represent the views of the Bar. Since independence, it was the first time that thousands of lawyers across the country, in an unprecedented manner, took to the streets. Lawyers ran pillar to post to help the detainees and arrested.

BCI did not even think it right to express solidarity with several advocates, who had faced hostilities, for attempting to ensure the constitutionally guaranteed legal aid to the protesters who were nabbed by the police.

Even many law students of the country mustered the courage to condemn the police crackdown on student protests.

In any case, what is need for the BCI Chairman to air his personal views on the legislation using his public office, when the issue is not directly concerning the functions of BCI. The BCI Chairman had also lauded the Union Government when the special status of Jammu and Kashmir was revoked in August 2019.

It seems Mr Mishra has made inconsistency a badge. In Mr.Mishra, one sees a worshiper of power figures, lover of status-quo and hater of individual liberties. He has been using his office to show subservience to his political political ideology. Irony dies a several deaths when such a person points fingers at others for 'politicizing' the bar. It is unfortunate that by reducing the post of BCI Chairman to that of a courtier singing paeans to the system, he has squandered the opportunity to usher in proper institutional reforms which the legal profession badly need .

(Disclaimer : The views expressed in this article are those of the author's, and do not necessarily reflect the views of LiveLaw)