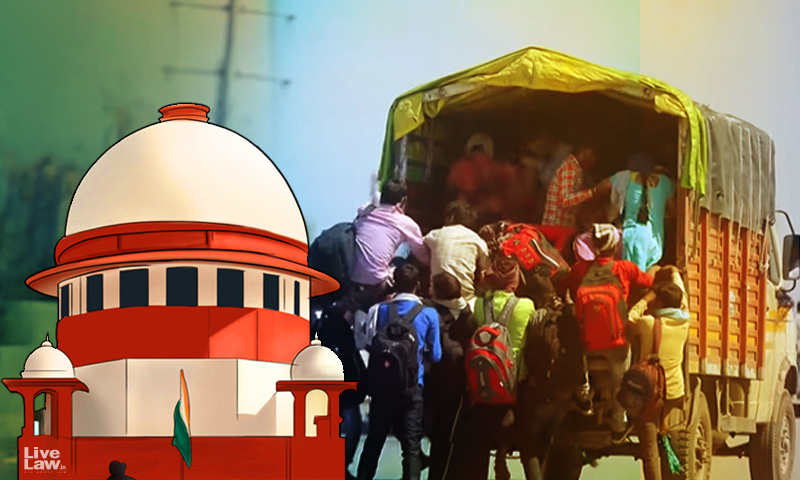 x
This development underlines the important role of informed,constructive criticism in a democracy.

After two months of unspeakable misery caused to millions of migrants in the country due to the national lockdown, which led to the loss of hundreds of lives, the Supreme Court took suo moto cognizance of the issue on Tuesday, May 26.Till then, the SC had been in a state of denial, unquestioningly believing the executive's version that "all is well". The cases brought before it concerning...

After two months of unspeakable misery caused to millions of migrants in the country due to the national lockdown, which led to the loss of hundreds of lives, the Supreme Court took suo moto cognizance of the issue on Tuesday, May 26.

Till then, the SC had been in a state of denial, unquestioningly believing the executive's version that "all is well". The cases brought before it concerning several issues relating to migrant workers, such as payment of wages, food security, shelter homes, transport and access to trains were closed by the court without effective orders (detailed and documented in this article).

The passive response of the apex court, and the excessive deference shown by it to the executive even in the middle of an unprecedented humanitarian crisis , had come under widespread criticism from ex-judges, senior advocates, and many members of legal fraternity, including law students. Even the ordinary citizens were anguished at the inaction of the apex court, going by many of the comments expressed in social media.

Former Supreme Court judges, Justices Madan B Lokur and V Gopala Gowda likened the Court's behavior to that of the emergency-era Supreme Court, where it had displayed a shocking lack of concern for the most basic rights of the citizens. Former HC judges, Justices A P Shah and Kailash Gambhir, criticized the Court's abdication of responsibilities. All these jurists were unanimous in their opinion that the Supreme Court let down the migrants amidst a grave constitutional crisis.

Senior Advocate Dushyant Dave, President of the Supreme Court Bar Association, minced no words in expressing disappointment at the Court's failure in holding the executive accountable.

"Judges cannot sit in ivory tower and be blindfolded to the miseries of the citizens of India", he said.

Expressing anguish at the passive response of the Supreme Court to the issue of migrant workers crisis amid the COVID-19 lockdown, Senior Advocate Jaideep Gupta commented that the top court "could have done a lot".

"The migrants walk home is not a casual irresponsible act of a citizen. It's a moment of existential crisis for them. The Supreme Court could have done a lot. Only they could have", he said.

Senior Advocate Sanjay Hegde commented that the Court's inaction amounted to 'social distancing from the powerless'.

"Judicial abnegation by the top court is not healthy for an institution trusted as being the protector and enforcer of rights", he said.

"This situation was compounded by the Hon'ble Supreme Court's failure to intervene in mid-day when millions of migrant workers had commences travelling home on foot, or by trucks", they said in the letter.

"As a consequence of the Court's failure to intervene, even though the number of Covid cases were then only a few hundred at the time, the millions of migrant workers were unable to proceed to their hometowns and were compelled to remain in small cramped tenements or rooms or on the pavements, without any employment or livelihood, and even a definite source of food. Infact this enforced stay in cramped quarters only exposed such poor worker to a higher risk of Covid infection", they added.

Meanwhile, many High Courts showed the way by staying true to their constitutional role of acting as a check on the executive.

The Gujarat High Court took suo moto notice of a host of issues related to the COVID-19 pandemic and the lockdown. What is commendable is that the Gujarat HC was not seeking to substitute its wisdom with that of the executive. Rather, it sought explanation from the government regarding its plan of action to deal with the issues to ascertain if it passed the constitutional muster.

The Court intervened only when it found that the government's responses were grossly unreasonable, or blatantly unsatisfactory. For example, the bench comprising Justices J B Pardiwala and Ilesh J Vora was quick to dismiss the puerile explanation given by the State for not doing enough number of COVID-19 tests. The Government told the bench that more number of tests could lead to 70% of the population testing positive, and that this could lead to "fear psychosis". The Court emphatically said that this cannot be a reason for reducing the number of tests.

Also, the Court did not shy away from highlighting the unsatisfactory conditions in the Ahmedabad Civil Hospital, which was leading to high mortality rate of COVID-19 patients.

Unlike the SC, the High Court did not turn its face away from the plight of migrants, and passed directions to ensure food and shelter to them. As regards their travel, the Court directed the railways to either waive off their one way charges, or the State to bear their fare.

Similar was the response of the Karnataka High Court with respect to the migrants issues. The Court demonstrated that by simply asking the right questions and making the relevant observations, the judiciary can get the government to act. Actual directions may not be always necessary. A bench comprising Chief Justice A S Oka and Justice B V Nagarathna of the HC observed that inability to pay rail fare should not become a ground to deprive migrants of their right to travel to their native places. This, the court explained, was due to the fact that their lack of income is directly linked to the lockdown imposed by the State. So, State has the constitutional obligation to mitigate their sufferings.

This led to the Karnataka Government taking a stand that it will bear the travel cost for Karnataka natives to come back from other states. In response, the Court asked if such a stand would not amount to discrimination against migrants within Karnataka, on the basis of place of origin.

Following the sustained interrogation from the Court, the Karnataka Government diluted its stance by deciding to bear the cost of migrants' travel from Karnataka to their native states.

Court would be failing in its role if it doesn't react : AP HC

The Andhra Pradesh High Court observed that the Court would be failing in its role, if it does not react to the issue of migrants being forced to walk hundreds of kilometers to their native places.

A division bench of Justice DVSS Somayajulu and Justice Lalitha Kanneganti passed a slew of directions to ensure proper availability of food, toilets and medical help etc. for these migrants. The Court observed that the situation was "alarming" and that "immediate intervention" of the Court was necessary.

Later, another bench headed by Chief Justice J K Maheshwari passed directions for creating temporary sheds for walking migrants, and to ensure their travel by bus/train within 48 hours of registration with the nodal officers.

The Madras HC suo moto sought an action taken report from the State Government and the Centre on the steps taken for the relief of migrants. The Court posed 12 specific queries to the Central and State Governments such as data on the migrant workers stranded in every state, the assistance being provided to them, the number of migrant workers who died on their way to their home states, the compensation for the families of the deceased migrant workers, and the assistance being provided to those who have returned to their native states

"It is a pity to see the migrant labourers walking for days together to reach their native places and in the process, some of them had lost their lives due to accidents. The Government authorities of all the States should have extended their human services to those migrant labourers", observed the HC bench comprising Justices N Kirubakaran and R Hemalatha.

The High Court of Kerala has been monitoring the steps taken by the Kerala Government to provide food and shelter to guest workers. The Orissa HC and Bombay HC had taken suo moto notice of the issue of migrants, and passed necessary directions. The Bombay HC however deferred the hearing taking note of the pendency of similar issues in SC.

The Telangana High Court made a powerful declaration that medical emergency cannot be an excuse for the government to trample upon the rights under Article 21 of the Constitution. Holding thus, the Court proceeded to quash a Government Order, which prohibited citizens from getting COVID-19 testing done from private laboratories, even if they have the requisite approval. The HC also sought report from the Government on the COVID-19 tests and regarding the measures taken to allay the plight of migrants.

Over all, the situation seemed to be a re-dux of emergency era, where the High Courts asserted their independent role to protect the rights of the citizens, despite the SC choosing to bow before the powers usurped by the executive.

In the face of mounting criticism, the SC has now chosen to act by taking suo moto notice of the issue.

This development also underlines the important role of informed,constructive criticism in a democracy.  A bunch of vigilant citizens, who constantly demand legitimacy and justifications from centres of power, can prevent the institutions from completely failing in their constitutional duties.

It took a considerable amount of public criticism for the SC to say that there have been "inadequacies and certain lapses" in the measures taken by the governments for migrants welfare, deviating from its earlier "what can we do?" stand. .

Let us hope that this course-correction by the apex court, though belated, leads to mitigation of the sufferings of the millions of migrant workers in the country.