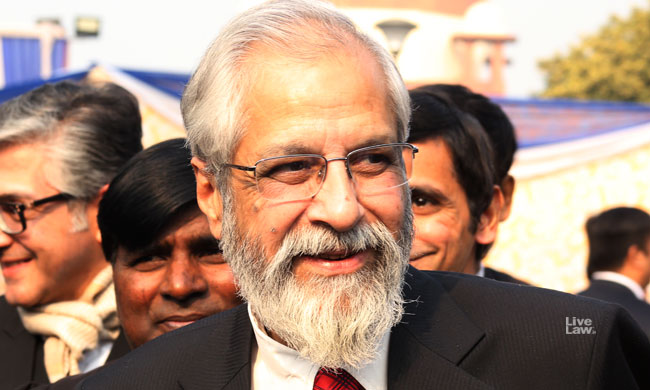 Eleanor Roosevelt said: Justice cannot be for one side alone, but must be for both. Was justice done to the Supreme Court staffer who made two allegations on affidavit - firstly of unwanted physical contact by the Chief Justice of India and secondly of victimisation. For the present purposes, I would only like to consider the allegation of victimisation. The allegation of victimisation relates to a departmental inquiry that continued despite the hospitalization of the complainant; her dismissal from service for expressing dissatisfaction about her frequent transfers and not reporting for duty but taking unauthorised half day casual leave; the dismissal of her brother in law from service in the Supreme Court; the suspension from service of her husband and another brother in law and her arrest in an unrelated case.

Institutional bias: Judges and lawyers are aware of institutional bias, that is to say a procedure influenced by decision-makers in an institution which procedure casts a doubt on the judicial or administrative process. Among the first reactions to the publication of the allegations was an email sent by the Secretary-General of the Supreme Court to The Wire early morning on 20th April, 2019. This was surely not an individual response but a response given by the Secretary-General in his capacity as a representative of the Supreme Court or the Chief Justice or both, otherwise he could very well have denied any concern with the allegations while allowing the law to take its own course. But no, the Secretary-General wrote:"The allegations regarding 11 October 2018, as well as other allegations as can be discerned from your emails, are completely and absolutely false and scurrilous and are totally denied."The denial clearly indicated that officially,allallegations were denied.

Unfortunately, the matter was reopened the same day (a Saturday) at 10:30 AM in Court No. 1 of the Supreme Court on a mention having been made by the Solicitor General of India. It is not clear before whom he mentioned the matter, when and why was the mention entertained and what procedure was followed. In the normal course, it would be fair to assume that the Solicitor General mentioned the matter before the Secretary-General who in turn brought it to the notice of the Chief Justice who gave an order to have the matter "touching upon independence of judiciary" listed in court. As per the notice brought out by the Supreme Court, the Bench was presided over by the Chief Justice. The Bench would have been constituted by the Chief Justice being the Master of the Roster and he nominated himself as the Presiding Judge.

On 22nd April, 2019 the Supreme Court Employees Welfare Association on behalf of all the employees strongly condemned the false, fabricated and baseless allegations against the Chief Justice.

Given these events, could it not be said that institutional bias had crept in in the manner in which the allegations of the lady staffer were initially dealt with? To me, the trappings of institutional bias are clearly made out whichever way one looks at the events of 20th April, 2019.

On 22nd April, 2019 the Supreme Court Advocates on Record Association as well as the Supreme Court Bar Association were sufficiently perturbed by the events that had taken place and they passed independent resolutions. While SCAORA was unhappy with the procedural impropriety, it strongly disapproved the manner in which the staffer's complaint was dealt with. It also requested for the appointment of a Committeeby the Full Court to investigate and enquire into the allegations and give an independent finding into the matter. The SCBA did not approve the procedure adopted for conducting the court proceedings and requested the Full Court to take necessary steps required by law. In other words, according to the SCBA the proceedings were not in conformity with the law and along with SCAORA, they were quite disturbed by what had transpired.

Mandate of the Internal Committee: Perhaps in view of the strange events and the resolutions passed by SCAORA and SCBA,a decision was taken to set up a Committee to enquire into the allegations made by the staffer. According to a website,the Chief Justice appointed Justice Bobde on 23rd April, 2019 to conduct an in-house inquiry into the allegations of sexual harassment levelled against him and Justice Bobde confirmed the development.From the confirmation, it appears that the decision to set up a committee was a decision taken by the Chief Justice and not the Full Court. That apart, the so-called in-house inquiry is a complete misnomer. In respect of alleged misconduct by the Chief Justice of India, there is no in-house enquiry procedure or any other remedial procedure laid down at all. So, the decision by the Chief Justice can only be understood as a decision to set up some kind of an ad hoc committee which I would prefer to call an Internal Committee of sorts.

What is equally mysterious is the rejection of the sane advice given by the Attorney-General on 22nd April, 2019 to the Chief Justice and the next four senior judges to constitute an Outside Committee of three retired judges of the Supreme Court. We have several eminent retired judges including women judges. It would have been to the credit of the Supreme Court if the advice had been accepted,there by negativing the belief of possible institutional bias. Moreover, the carefully thought out view expressed by SCAORA and SCBA would also have been accommodated if an Outside Committee had been set up. But it was not to be.

On a consideration of the overall facts, it does appear that some injustice has been done to the staffer. Martin Luther King Jr. famously wrote: "Injustice anywhere is a threat to justice everywhere. We are caught in an inescapable network of mutuality, tied in a single garment of destiny. Whatever affects one directly affects all indirectly." I am reminded of this because of my belief that the staffer has not been fairly treated.Many questions are left unanswered and actually many are trying to solve a riddle, wrapped in a mystery inside an enigma. Some transparency is needed. Can any member of the Internal Committee or somebody from the Supreme Court please help!

This article is first published in Indian Express.

You can read the original here