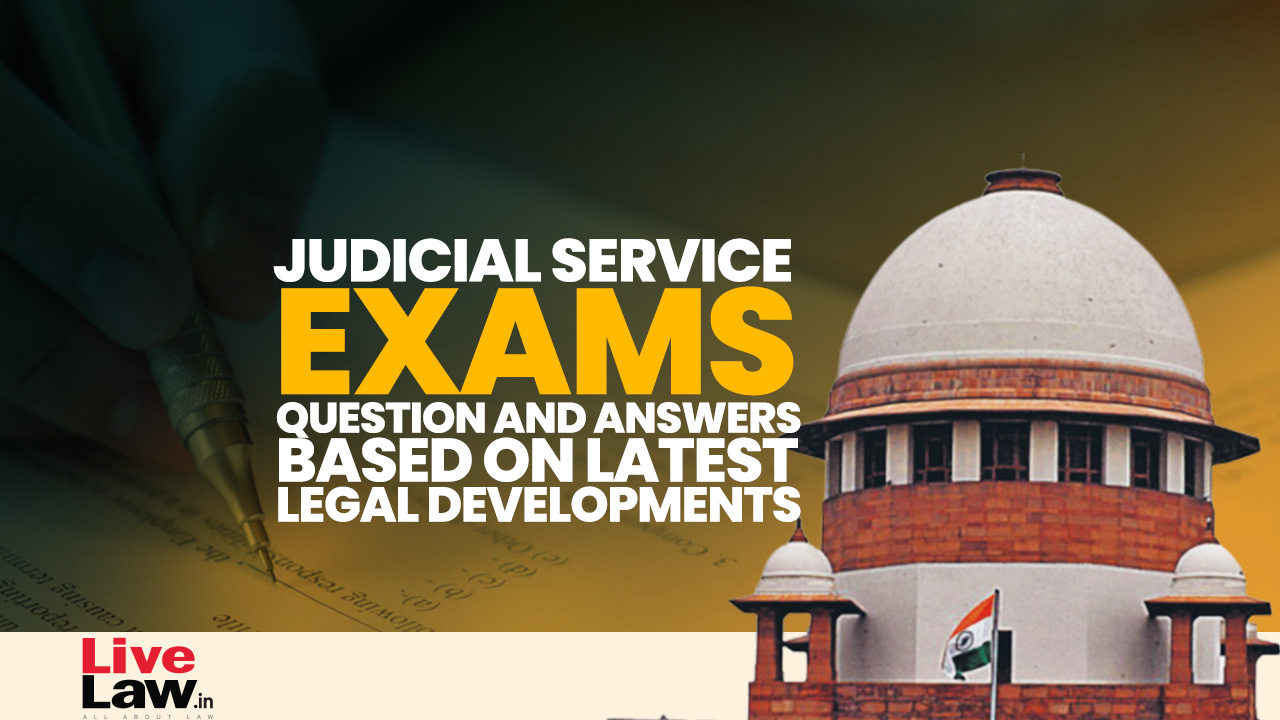 Q1. Which of the following is true with respect to a daughter's right of inheritance?

a. A sole daughter will inherit to her intestate father's self-acquired property who dies prior to the enforcement of Hindu Succession Act, 1956

b. A sole daughter will not inherit her intestate father's self-acquired property who dies prior to the enforcement of Hindu Succession Act, 1956

c. Collaterals would be preferred over the sole daughter of such intestate father

Answer: b [A sole daughter will not inherit her intestate father's self-acquired property who dies prior to the enforcement of Hindu Succession Act, 1956]

Q2. The Supreme Court in 2022 held that Automative Research Institute of India is:

a. Is a state under Article 12, Constitution of India

b. Is not a state under Article 12, Constitution of India as there is no deep and pervasive control of the government

c. Is not a state under Article 12, Constitution of India as there is no element of public duty involved

d. None of the Above

Answer: b [is not a state under Article 12, Constitution of India as there is no deep and pervasive control of Government]

Explanation: The Supreme Court held in Kishor Madhukar v. Automotive Research Association of India that the institute is not a state because the Memorandum indicates that it enjoys significant and substantive freedom and independence. The Association is not under the control of the central government and the supervision is limited and confined to specific aspects, which do not have the effect of deep and pervasive control of the Central Government

Q3. In which of the following landmark cases, it was held by the Supreme Court that vaccinates mandates are unconstitutional and that no one can be forced to get vaccinated on account of his right to bodily integrity?

Explanation: In the case of Jacob Puliyel v. UOI, Supreme Court of India held that bodily integrity is protected under Article 21 of the Constitution of India and no individual can be forced to be vaccinated.

Q4. Supreme Court in the recent case of Buddhadev Karmaskar v. State of West Bengal laid down detailed guidelines in context of

Explanation: In the aforementioned case, the SC issued certain guidelines for protection of sexual workers, including:

Q5. In which of the following landmark judgments the Supreme Court of India has held that Section 124A, IPC, 1860 to be kept in abeyance till Union Government reconsiders it?

Explanation: Supreme Court of India in this case held that all pending trials, appeals and proceedings with respect to the charge framed under Section 124A of IPC be kept in abeyance. Adjudication with respect to other Sections, if any, could proceed if the Courts are of the opinion that no prejudice would be caused to the accused

Q6. Who among the following Delhi HC judges held in the case of RIT Foundation v. UOI that Exception 2 to Section 375, IPC, 1860 is unconstitutional?

Explanation: Justice Rajiv Shakdher held that Exception 2 to Section 375 of the Indian Penal Code (which prescribes the marital rape exception) is "violative of Articles 14, 15, 21 of the Constitution and hence must be struck down." The Division bench delivered a split verdict whereby Justice C Hari Shankar held that Exception 2 to Section 375 does not violate Constitution and that the exception is based on an intelligible differentia.

a. Custody in form of Police Custody

b. Custody in form of Judicial Custody

d. All of the above

Answer: d [All of the above]

Q8. The Supreme Court partially struck down the 97th Amendment to the Constitution of India in a landmark case of 2021. The amendment deals with:

b. Reservation in Promotions

c. The strength of Council of Ministers

Explanation: A 3-judge bench comprising Justices Rohinton Nariman, KM Joseph and BR Gavai unanimously held in the case of UOI v. Rajendra Shah that the 97th Constitutional Amendment required ratification by at least one-half of the state legislatures as per Article 368(2) of the Constitution, since it dealt with a entry which was an exclusive state subject (co-operative societies). Since such ratification was not done in the case of the 97th Constitutional amendment, it was liable to be struck down.

Q9. Arrest of an accused is necessary under Section 170 CrPC to forward the accused to the Magistrate. Examine the correctness of this statement:

a. The statement is not correct as the word custody under Section 170 does not mean "police or judicial custody"

b. The statement is correct.

c. The statement is not correct. Law does not mandate arrest under Section 170, and arrest is to be done only when so required.

Explanation: In the case Siddharth v. State of UP, the SC observed:

"It has rightly been observed on consideration of Section 170 of the Cr.P.C. that it does not impose an obligation on the Officer-in-charge to arrest each and every accused at the time of filing of the chargesheet.

We have, in fact, come across cases where the accused has cooperated with the investigation throughout and yet on the chargesheet being filed non-bailable warrants have been issued for his production premised on the requirement that there is an obligation to arrest the accused and produce him before the court.

We are of the view that if the Investigating Officer does not believe that the accused will abscond or disobey summons he/she is not required to be produced in custody."

Q10. The case of Aparna Bhat v. State of Madhya Pradesh is celebrated for laying down guidelines with respect to:

b. Equality at Workplace

Explanation: In this case, the Supreme Court laid down detailed guidelines as to "judicial stereotyping". The judgment illustrated certain conduct and actions as irrelevant for adjudication - to say that the survivor had in the past consented to such or similar acts or that she behaved promiscuously, or by her acts or clothing, provoked the alleged action of the accused, that she behaved in a manner unbecoming of chaste or "Indian" women, or that she had called upon the situation by her behavior, etc.

Q11. Which of the following is true with respect to the Supreme Court's decision in Mohammad Salimmuah on the issue of rights of Rohingyan Refugees?

a. Right not to be deported' is concomitant to Article 19 and available only to Indian citizens ad not Rohingyan Refugees

b. Right not to be deported' is concomitant to Article 21 and available to Rohingyan Refugees

c. The right of the refugees to not be deported is not protected under Article 21 or Article 14

Q12. In which of the following cases, the Maratha Reservation Quota was struck down by the Apex Court?

a. Dr Jaishree Laxmanrao Patil v The Chief Minister and others

d. None of the Above

Answer: a [Dr Jaishree Laxmanrao Patil v The Chief Minister and others]

Explanation: Supreme Court observed in the aforementioned case that the Maratha quota in excess of 50% ceiling limit as unconstitutional.

The Court unanimously held that there were no exceptional circumstances justifying the grant of reservation to Marathas in excess of 50% ceiling limit as a Socially and Economically Backward Class.

Q13. Which of the following is true with respect to the recent Supreme Court's judgment on GST council?

a. There is no provision which states that all the decisions of the GST Council will be binding

b. All decisions of GST council are binding

c. Recommendations of the Goods and Services Tax (GST) Council only have persuasive value

Explanation: The Supreme Court observed in the case of UOI v. M/s Mohit Minerals that the 'recommendations' of the GST Council are the product of a collaborative dialogue involving the Union and States. They are recommendatory in nature. To regard them as binding edicts would disrupt fiscal federalism, where both the Union and the States are conferred equal power to legislate on GST"

Q14. In the landmark case of Kasi v. Inspector of Police, the Supreme Court held:

a. Extension of limitation period during Covid is not applicable to compute the period mentioned under Section 167(2) CrPC and shall not restrict the right to default bail of accused.

b. Extension of limitation period during Covid is applicable to compute the period mentioned under Section 167(2) CrPC and shall restrict the right to default bail of accused.

c. Extension of limitation period during Covid is applicable to compute the period mentioned under Section 167(2) CrPC and shall restrict the right to default bail of accused but only in case of heinous offences

Explanation: In this case the SC held that extension of limitation period during Covid is not applicable to compute the period mentioned under Section 167(2) CrPC and shall not restrict the right to default bail of accused.

Q15. Supreme Court of India in a 2020 landmark judgment held that that Short Service Commissioned women officers in the Indian Army are entitled to permanent commission and that they have to be considered for the same irrespective of their having exceeded fourteen years of service. Which is this judgment?

Explanation: In the case of Secretary, Ministry of Defence v. Babita Puniya, Apex Court directed that Permanent Commission should be granted to women in army regardless of their service, in all the ten streams where the Union Government have already taken a decision to grant Short Service Commission to women.