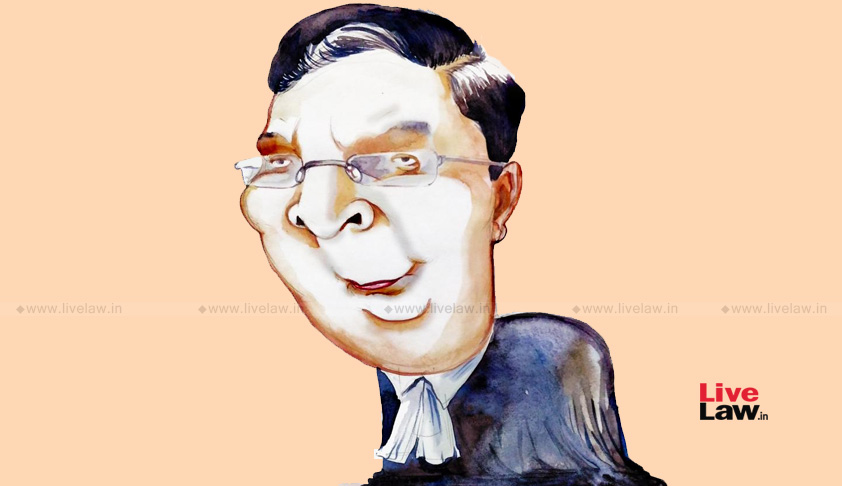 Tuesday Justice Dipak Misra turns 65 and it was his last day as a Supreme Court judge. The nephew of former CJI Justice Ranganath Misra, Justice Dipak Misra started his practice in Orissa High Court and later became its judge in 1996. After serving as judge of Madhya Pradesh High Court for a long time, he was appointed as Chief Justice of the Patna High Court, and later as Chief Justice of...

Tuesday Justice Dipak Misra turns 65 and it was his last day as a Supreme Court judge. The nephew of former CJI Justice Ranganath Misra, Justice Dipak Misra started his practice in Orissa High Court and later became its judge in 1996. After serving as judge of Madhya Pradesh High Court for a long time, he was appointed as Chief Justice of the Patna High Court, and later as Chief Justice of the Delhi High Court. He was elevated to the Supreme Court on 10th October 2011. On 28th August 2017, he became the Chief Justice of India. Today he is stepping out after 22 years of judicial service in constitutional courts.

Judges are known through their judgments. They get praise and criticism for what they write as a judge. This article attempts to scan through some significant and important judgments authored by Justice Dipak Misra as a Supreme Court judge and as a CJI.

His tenure as CJI was not smooth as he had to face criticism of his own ‘brother judges’ who went public in the Master of Roster controversy. Some opposition parties even went to the extent of initiating ‘impeachment’ proceedings against him, though it did not fructify. But this did not stop the man from setting up constitution benches which delivered landmark judgments.

The CJI Misra-led constitution bench delivered landmark judgments which allowed women to enter Sabarimala shrine, upheld Aadhaar (by striking down/reading down some provisions of the Aadhaar Act), decriminalised homosexuality and adultery, and recognised passive euthanasia. It also held that candidates cannot be disqualified on framing of charges in criminal case.

CJI Misra authored his last judgment in the Sabarimala case. Speaking for himself and Justice AM Khanwilkar, he observed that the exclusionary practice (denial of entry to women in Sabarimala) is neither an essential nor an integral part of the Hindu religion without which Hindu religion, of which devotees of Lord Ayyappa are followers, will not survive. He further said that right guaranteed under Article 25(1) has nothing to do with gender or, for that matter, certain physiological factors specifically attributable to women and the denial of entry to the temple denudes them of their right to worship. CJI Misra remarked that it is not the exclusion but allowing women to temple as a devotee which is the essential practice of Hindu religion.

Aadhaar Upheld But With Riders

Interestingly, CJI Misra did not write any judgment in the Aadhaar case. He and Justice AM Khanwilkar concurred with the lead judgment authored by Justice AK Sikri that read down some of the provisions of the Aadhaar (Targeted Delivery of Financial and Other Subsidies, Benefits and Services) Act 2016, struck down a few but significant ones (mainly Sections 33(2), 47 and 57), and upheld the rest. Justice DY Chandrachud dissented and opined that the whole Aadhaar project is unconstitutional, while Justice Ashok Bhushan wrote a separate opinion concurring with the majority.

The constitution bench headed by CJI Misra struck down 158-year-old Section 497 of the Indian Penal Code, which criminalizes adultery. Observing that there cannot be patriarchal monarchy over daughter or husband’s monarchy over wife, the CJI ruled that S.497 gives licence to husband to deal with wife as he pleases and dents the individual dignity of women.

The constitution bench unanimously declared that Section 377 of the Indian Penal Code was unconstitutional, insofar as it criminalises consensual sexual acts of adults in private. CJI Misra, in his judgment, observed that the LGBT community possesses equal rights and their sexual orientation was an essential facet of the right to privacy. He said that the Section was like a weapon in the hands of the majority.

The constitution bench in March this year recognized and gave sanction to passive euthanasia and living will/advance directive. CJI Misra observed that all adults with the capacity to consent have the common law right to refuse medical treatment and the right of self-determination. He, however, cautioned that doctors would be bound by the patient’s choice of self-determination, subject to being satisfied that the illness of the patient is incurable and there is no hope of his being cured. He said the state interest should not over-weigh individual interest and that a person should be allowed to die peaceably instead of prolonging the process against his will through technology.

No Disqualification Merely Because Charges Are Framed Against Candidates

A five-judge bench presided by CJI Misra held that candidates cannot be disqualified merely because charges have been framed against them in a criminal case. CJI Misra, speaking for the bench, urged the legislature to consider framing law to ensure decriminalisation of politics.

In December, last year, CJI Misra, speaking for the five-judge bench observed that the jurisdiction of a court conferred under a statute cannot be allowed to shift or become flexible because of a superior court’s interference in the matter in a different manner. This overruled earlier SC judgments that had held that when an arbitrator is appointed by the Supreme Court and further directions are issued, it retains seisin over the arbitration proceedings and in such circumstances, the Supreme Court is the only court for the purposes of Section 2(c) of the Act.

Other Significant Judgments By CJI Misra

While setting aside the Kerala High Court judgment that annulled Hadiya’s marriage to Shafin Jahan terming it a “sham”, CJI Misra observed that choosing a faith is the substratum of individuality and is part of the fundamental right of choice.

Chief Justice Dipak Misra, condemning the lynching incidents across the country, said horrendous acts of mobocracy cannot be allowed to become a new norm in the country. He said it is the duty of the State to ensure that the machinery of law and order functions efficiently and effectively in maintaining peace so as to preserve our quintessentially secular ethos and pluralistic social fabric in a democratic set-up governed by the rule of law.

The consent of the family or the community or the clan is not necessary once two adult individuals agree to enter into a wedlock, said a three-judge bench comprising Chief Justice Dipak Misra and Justices AM Khanwilkar and DY Chandrachud while holding that any attempt by khap panchayats or any other assembly to scuttle or prevent two consenting adults from marrying is absolutely “illegal”.    CJI Misra also issued various directions in this regard.

A three-judge bench headed by CJI Misra partially allowed the appeal preferred by Karnataka in 2007 against the order of the Cauvery Water Disputes Tribunal. The bench directed Karnataka to release 177.25 TMC of water, instead of 192 TMC to Tamil Nadu.

Dismissing a plea to ban a Malayalam novel ‘Meesha’, which had become controversial in Kerala for allegedly hurting Hindu sentiments, CJI Misra, through his judgment, reminded that we live not in a totalitarian regime, but in a democratic nation which permits free exchange of ideas and liberty of thought and expression. He also called upon the readers and admirers of literature and art to exhibit a certain degree of adherence to the unwritten codes of maturity, humanity and tolerance so that the freedom of expression reigns supreme and is not inhibited in any manner.

Modifies His Own National Anthem Order

CJI Misra-headed bench modified its earlier interim order that made the national anthem mandatory in every cinema theatre. The court left it to the discretion of each cinema house.

The apex court bench headed by the CJI allowed the plea of actress Priya Prakash Varrier and the director and producers of Malayalam film ‘Oru Adaar Love’ and quashed the FIR and criminal complaints in Telangana and Maharashtra, respectively, registered against them for allegedly hurting the religious sentiments of Muslims.

Emphasising on “right to freedom of speech and expression”, the Chief Justice Dipak Misra-led bench stayed the operation of the notifications of the states of Gujarat and Rajasthan and the decision of the states of Madhya Pradesh and Haryana to ban the screening of the film ‘Padmavat’.     Later while dismissing Manohar Lal Sharma’s plea seeking to stop release the movie, CJI Misra, in his order, had written a 148-worded sentence. The bench also took serious note of “people holding high public offices” making adverse comments on the movie when the film’s clearance is pending before the CBFC, the censor board.

There are some significant judgments by the bench headed by CJI Misra, but not authored by him. Here is the list of such judgments (author’s name given in brackets).

Significant Judgments of Justice Dipak Misra (Before He Became CJI)

Law on criminal defamation not unconstitutional

A two-judge bench headed by Justice Dipak Misra upheld the constitutional validity of Section 499/500 IPC. Making it clear that criminal defamation law will remain the statute book, the bench said: “[R]eputations cannot be allowed to be sullied on the anvils of free speech as free speech is not absolute. Right to life and freedom of speech have to be mutually respected.”

The apex court-bench headed by Justice Misra directed that copies of the FIRs, unless the offence is sensitive in nature, like sexual offences, offences pertaining to insurgency, terrorism and of that category, offences under the POCSO Act and such other offences, should be uploaded on the police website, and if there is no such website, on the official website of the state government, within 24 hours of the registration of the First Information Report so that the accused or any person connected with the same can download the FIR and file appropriate application before the court as per law for redressal of his grievances.

Death Penalty to Nirbhaya Convicts
A three-judge bench headed by Justice Misra upheld the death penalty of convicts in Nirbhaya rape and death case. Justice Dipak Misra termed the incident as “Tsunami of shock” while describing the nature and gravity of offence committed by the convicts.

It was the three-judge bench headed by Justice Dipak Misra that heard during midnight the plea of terror convict Yakub Memon seeking to stay his execution. He was hanged hours later after the bench dismissed the plea to stay death penalty.

Upholds Prosecution of Poet for Obscene Poem on Mahatma Gandhi

Justice Misra bench, upholding prosecution of a poet, observed that in the name of artistic freedom or critical thinking or generating the idea of creativity, a poet or a writer cannot put into the voice or image of a “historically respected personality” like Mahatma Gandhi such language, which may be obscene.

No Compromise In Rape Case

An SC bench headed by Justice Misra held that in a case of rape or attempt of rape, the conception of compromise under no circumstances can really be thought of. The court also ruled out mediation in such cases.

156(3) CrPC Applications to Be Accompanied By Affidavit

A bench headed by Justice Dipak Misra held that applications u/s 156(3) of the CrPC have to be supported by an affidavit to avoid unnecessary applications and the magistrate has to apply his judicial mind cautiously before making any order. In this judgment, Justice Misra had written a 192-worded sentence.