Constitution Is A Living Document; Hijab Can Be Given Same Protection Given To Sikh Turbans and Kirpans: Sr. Adv Colin Gonsalves To Supreme Court [Read Written Submissions] 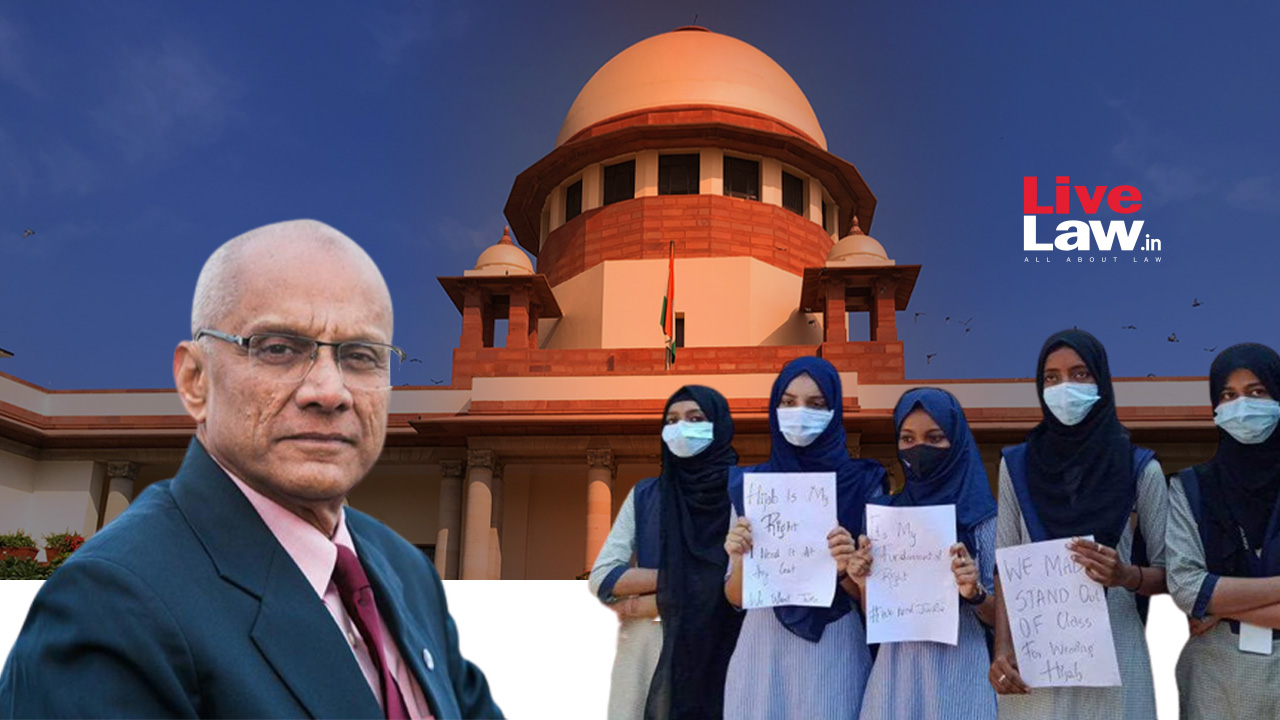 The Supreme Court is continuing hearing the petitions challenging the Karnataka High Court's judgment which upheld the ban on wearing hijab by Muslim students in educational institutions.

Senior Advocate Dr Colin Gonsalves argued that the Karnataka High Court ignored international precedents on the subject and wrongly held that if hijab is not shown to be essential in Islam, there is no right. He submitted that several observations made by the High Court hurt religious sentiments of the community and gives wrong impression about Islam to other religions.

He argued that Hijab is essential to the conscience of several Muslim girls and must be given same protection as Sikh Turbans and kirpans under the Indian Constitution.

As per Gonsalves, the High Court went wrong in holding that Petitioners failed to show that they were wearing hijab to school, prior to the ban. "Millions of girls in India are following from time memorial. No pleading at all is necessary," he said.

Justice Gupta told Gonsalves that the Court has to decide each case based on the case set up.

"The case was it was an essential religious practice. The High Court has gone into that fact. The question of pleading was on whether these girls were wearing hijab prior to the controversy."

Gonsalves responded that the question to be asked is not whether few girls were wearing hijab or not.

"The question is if Hijab is a practice of Islam, and of course it is. Millions of girls wear it. They feel it essential. It may not be essential in the sense you are excommunicated if you don't follow. But the fact is it is followed widely.

The question is if the practice is genuinely or conscientiously held as part of profession of religion and not whether it is essential or not. This is the test. That's all."

Gonsalves said that the High Court judgment is from the perception of the majority community, where the minority view is seen very partially.

"It is a majoritarian judgment. It does not have the Constitutional independence. There are startling paragraphs, hurting paragraphs in the judgment."

While stating that the High Court judgment is a majoritarian one, Gonsalves referred to the observations that Hijab is not a religious practice and not a cultural practice, and that one cannot have scientific temper if you wear hijab.

Gonsalves also referred to High Court's observations that insistence on wearing hijab is against emancipation of women.

"Hurtful statement! If I wear hijab, I can't have scientific temper or emancipation of women?

Linking hijab with sectarianism, wearing hijab with divisive lines…so the hijab divides, hijab could breed indiscipline, social unrest? This is the language of judgment. This is not a judgment which should pass the muster.

The High Court's judgment is not respectful of the minority community. It was a one-sided approach. Judgment should be set aside and sent back to a different bench of the High Court.

High Court says fundamental rights of citizen will not apply in a qualified public space and only derivative rights will apply. Judges are evolving a new principle of constitutional jurisprudence.

Judge makes an analogy with prisons. He says individual fundamental rights you can't assert because you are in a qualified public space. I don't see where this comes from. It is not there in Indian jurisprudence. It is a new theory.

If a student could be asked to remove a hijab, then a lawyer can be told to remove hijab. This theory of qualified public space is very dangerous."

Gonsalves said that they had raised Supreme Court judgments on diversity. However, the High Court discarded those arguments saying "hollowed rhetoric and platitude".

Justice Dhulia pointed that the High Court said freedom of religion and freedom of conscience are two differently thing.

"High Court says merely saying wearing of hijab is part of conscience and removing it is offensive is not sufficient. Why is it not sufficient? It was not a case of 10 children. It was affecting the whole state."

"What will the other students think when police come, when Principal stops hijab wearing girls...It sends a message that there is something wrong about the religion of Islam that it needs Policing. The wrong equation of hijab with law and order problem is a shocking formulation."

Constitution is living document; Hijab can be given same protection as Sikh Turbans and kirpans: Gonsalves

In a previous hearing, Justice Hemant Gupta had orally remarked that hijab could not be compared with Sikhism as practices of Sikhism were "well engrained in the culture of the country."

Referring to the same, Gonsalves submitted,

The answer is Constitution is a living document. What was previously not acceptable can be acceptable now. The argument is, if a turban is allowed in a school, why not the hijab?. What is the difference?"

You never tell a Sikh boy, take off your turban. It is central to his religion. It is the same intensity and same religiosity for a Muslim girl regarding hijab."

Gonsalves also referred to Justice Gupta's remarks that whether the right to dress would also include right to undress, and said:

What better way for children in India to learn about different religions than from their own friends who come to school, some in a turban, some in a hijab, go for Diwali, go for Christmas, go for Eid.

Students coming from different religious backgrounds, will they be not the best teachers of religion (Aruna Roy v. Union of India and KwaZulu-Natal and Others v Pillay)."

High Court could not have ignored international precedents: Gonsalves

"To me, the most important issue in this case, whether the practice of wearing the hijab is essential or not. Once the practice is established, the practice is covered by Article 25 completely. High Court said No. We want to address that.

Unfortunately, the High Court did not entertain that line of argument. High Court was of the opinion that perhaps due to the emphasis given to essentiality, it does not look at any other right.

Court says if you can't show it is essential, there is no right. When we show the international cases, those were shut out...you will find hardly any analysis or appreciation of these judgments. They are leading judgments of the world - South Africa, Kenya & Canada."

Gonsalves submitted that the High Court was of the view that adjudication must be based on native law. However, he submitted that there are not many judgments in India which deal with cases of practices which are established but not essential, he said.

Justice Gupta then pointed out that Indian courts have applied the essential religious practice test, starting from 1954 Shirur Mutt case.

However, Gonsalves submitted that as per Puttaswamy judgment, Indian courts are bound to consider international precedents presented before it unless there is something against Indian law.

He submitted that the Kenyan judgment which upheld right to wear heard hijab even in a Christian school, applies on all fours to the instant case.