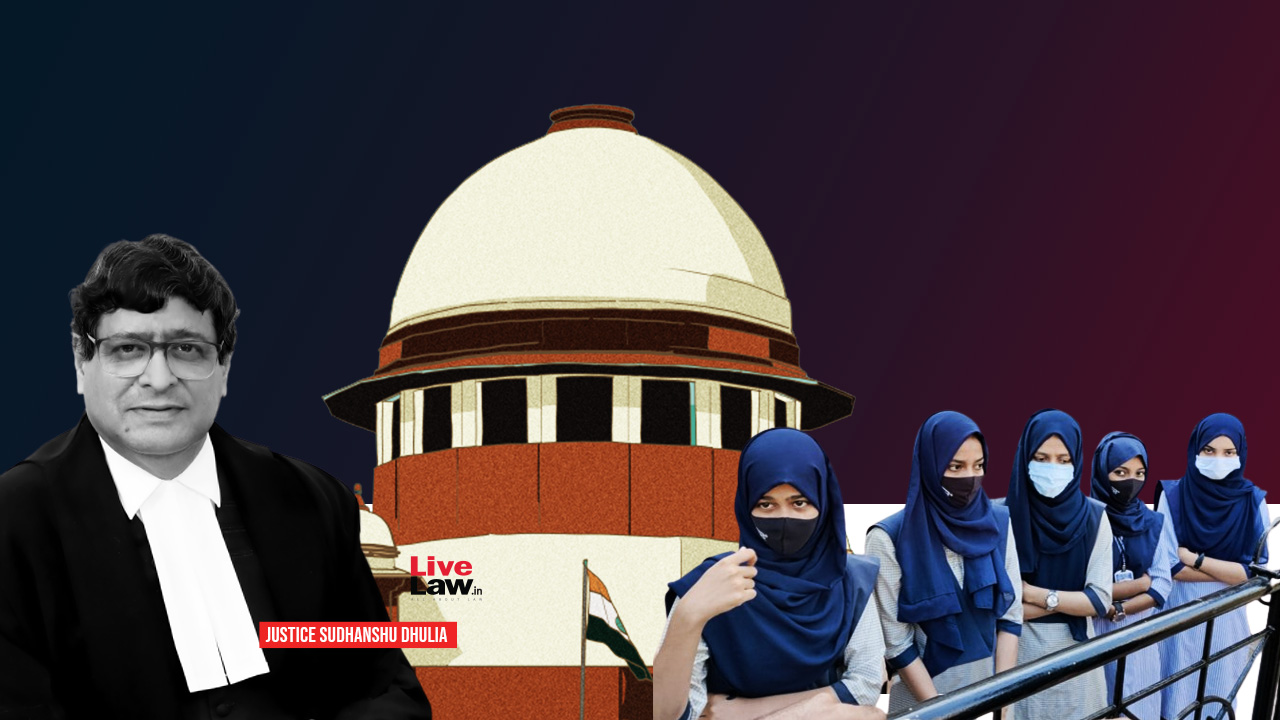 On the ninth day of hearing in the Hijab case, Supreme Court judge Justice Sudhanshu Dhulia asked how the State will prepare its students to face the religious and cultural diversity in the world, if it restricts religious apparel in schools in the name of equality and discipline.Justice Dhulia also remarked that display of religious symbols may be an opportunity for the students to look at...

On the ninth day of hearing in the Hijab case, Supreme Court judge Justice Sudhanshu Dhulia asked how the State will prepare its students to face the religious and cultural diversity in the world, if it restricts religious apparel in schools in the name of equality and discipline.

Justice Dhulia also remarked that display of religious symbols may be an opportunity for the students to look at the country's diversity and be "culturally sensitive".

The remarks were made when Senior Advocate R Venkataramani, appearing for a teacher of Udupi college, submitted that schools must be free from all religious elements to ensure transmission of knowledge between the teacher and the student, without any separation or walls.

In a school, how will you inculcate the values? Venkataramani asked.

This prompted Justice Dhulia to state,

"Teacher may also say, this is an opportunity, look at diverse country, be culturally sensitive, that can also be an exercise."

"How will you prepare the students, when the go out of the schools, when the face the world, they will face the great diversity of the country, in culture, in dress, cuisine, so this can be an opportunity to prepare them. That can be also a perspective."

The Bench also comprising Justice Hemant Gupta is hearing a batch of petitions challenging the Karnataka High Court's judgment which upheld the ban on wearing hijab by Muslim students in educational institutions. The Petitioners' side had concluded its arguments yesterday and the Respondents concluded today.

ASG Nataraj argued that Article 14 prevails over Article 25 and thus, religious symbols cannot be permitted in institutions imparting secular education. He pointed out that Article 25 right is made subject to the other rights under Part III of the Constitution.

He submitted that there is no need to show violation of public order, morality or health to restrict Article 25 if the restrictions imposed are necessary to ensure protection of Article 14. "State action was to promote oneness; students should feel equal… Question is not hijab. We say follow uniform."

He also opposed the prayer of referring the case to Constitution Bench. "This is a simple case of discipline. No person has been discriminated on the ground of religion. All have been treated equally."

Mohana submitted that the whole issue has been seen from the angle of religion and not from viewpoint of education.

"School is a public place where they come to form a symbiotic relationship, forgetting where they are coming from…It is not about religion, it is about bringing discipline to students. As a teacher it's my moral and legal duty to ensure that disciplined atmosphere is maintained."

Naidu appearing for a professor argued that in schools, there should a zero-tolerance approach about uniform. "Let everybody bow down to Constitution so that they can have their religion in their hearts."

At the outset, ASG Nataraj submitted State has not banned hijab and it was never the intention.

"State has only prescribed uniform which is religion neutral. We have neither prohibited nor promoted any religious activity. We are very clear and conscious of the fact that classification on the basis of religion is impermissible in institutions."

He submitted that though right to religion is protected under Article 25, however, in the present case, Article 14 also assumes relevance to ensure equality among students.

"In schools, uniforms are prescribed to treat all students equally. So, Article 14 steps. All communities are treated equally. That is the most appropriate. What is done by State is, all of you are equal, all of you must come in uniform irrespective of your religion. So, Article 14 is protected here. What has been done by a positive State action is to promote Article 14."

The ASG responded that all students are given equal protection of law.

"Equal protection of law is not treating differently. Somebody is not treated separately. Students as a whole has been made a class. Religion is a dividing factor. Students have been put together as a single class. No separate law for separate religions. Otherwise, what happens is that there will be discrimination on the basis of religion in a secular institution. Today one person says it is my right to wear hijab. Another person will say he wants to wear shawl. Another person will want something else. How can you have religious symbols in a secular education institution? Secular education is not meant for that."

Justice Gupta asked whether irrespective of no violation of public order, morality or health, Article 25 can be made subject to Article 14.

Rights of minorities under Article 30 not absolute: ASG

Article 30 of the Constitution protects minorities' right to establish and administer educational institutions.

ASG said that though on a first blush it appears that it is an absolute right, however, the Supreme Court has interpreted in a catena of judgments that Article 30 rights can be regulated.

He said that the Karnataka Education Act, which has been invoked in the present case, was enacted with the objective of ensuring better administration of education, cultivating secular outlook and scientific temper among students, discipline in the institution...

ASG said that the State action was to promote oneness among students, so they feel equal.

"So, you are preventing them from entering school because you want to promote national integration?" Justice Dhulia asked.

ASG responded that the State is not preventing anyone. "We are saying follow uniform."

"But you prevent them from wearing hijab?" Justice Dhulia asked.

"Question is not hijab. We say follow uniform," ASG responded.

Justice Dhulia pointed that the net effect is that a girl can't wear hijab.

"State has not said don't wear hijab. We respect hijab, we respect shawl, everything," ASG responded.

"You say keep it outside school," Justice Gupta remarked.

In response, ASG cited the Supreme Court judgment which upheld that an airman can't keep beard violating the code of the forces.

"Tomorrow a person might say Burqa is my fundamental right. But when you go to airport, you have to show your face. A Hindu can say performing Hawan is fundamental right, but can say allow hawan at India Gate or in Court. All religious rights must be balanced."

Restrictions on Article 25 need not be tested on touchstone of Article 19: Venkatramani

"The contours of freedom of expression have a certain front. If right to religion covers it, you don't have to latch on to right to freedom of expression…Rights are exercised in their respective domains. If one right is projected onto another, it can become problematic. Dividing line can be thin. Court will be clear in finding where exactly the claim will fit in."

Justice Gupta pointed that the Petitioners are claiming a primary right under Article 25 and Article 19 and it is their case that the restrictions on wearing of hijab do not come under 19(2).

Does Hijab create a wall of separation? Court

Venkataramani submitted that from the viewpoint of a teacher, the objective is 'transmission of knowledge' without any separation or walls.

Venkataramani responded that display of any religious symbol would. "School must be free from all these elements without slightest distractions."

Justice Dhulia however remarked that it depends of the perception of the teacher. "Teacher may also say, this is an opportunity, look at diverse country, be culturally sensitive, that can also be an exercise."

"How will you prepare the students, when the go out of the schools, when the face the world, they will face the great diversity of the country, in culture, in dress, cuisine, so this can be an opportunity to prepare them. That can be also a perspective."

Venkataramani responded that the absence of assertion of religious identities is a conducive environment to inculcate values about the diversity.

Justice Dhulia said nobody is claiming any superiority.

Venkataramani responded, "It is bound to happen once you allow the assertion of identities…"

Freedom of conscience does not include religious practices like wearing hijab: Venkataramani

Venkataramani argued that Conscience is a "secular domain", distinct from religious right.

"Wearing a band against Vietnam war, that is a conscientious objection. Conscience is about ethical dispositions. In a matter like hijab, there is no conscience element. It is based on religious belief, Quranic prescription. So, it is all about religion, nothing but religion. If it is not conscience, then it is religion. Sometimes there could be overlapping depending on the fact situation."