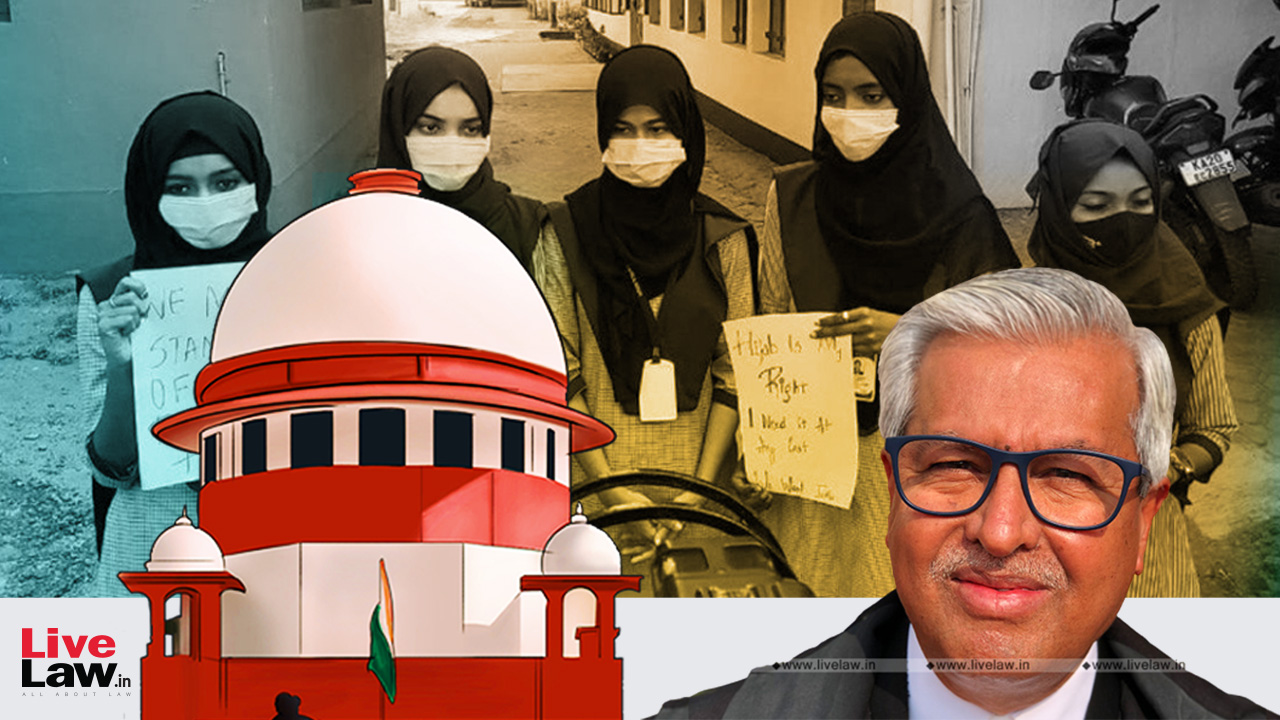 The Supreme Court today continued hearing the petitions challenging the Karnataka High Court's judgment which upheld the ban on wearing hijab by Muslim students in educational institutions. Today was the seventh day of hearing by bench comprising Justices Hemant Gupta and Sudhanshu Dhulia. Senior Advocate Dushyant Dave appearing for the Petitioners made elaborate submissions on...

The Supreme Court today continued hearing the petitions challenging the Karnataka High Court's judgment which upheld the ban on wearing hijab by Muslim students in educational institutions. Today was the seventh day of hearing by bench comprising Justices Hemant Gupta and Sudhanshu Dhulia.

Senior Advocate Dushyant Dave appearing for the Petitioners made elaborate submissions on religious and cultural diversity of India, Constituent assembly debates and protection of religious rights under Article 25 of the Constitution.

He submitted that Muslim girls wearing Hijab cannot be said to have hurt anybody's sentiments. "Our identity is hijab," Dave remarked.

He added that first, the whole dispute over 'love jihad' and now, the prevention of Muslim girls from wearing hijab to educational institutions, reflects a pattern to "marginalise" the minority community.

He urged the Bench that with the expansion of scope of Article 19 and 21, the Constitution has to interpreted liberally. "Religious right is individualistic; it is the choice of an individual…"

Hijab ban and other series of actions to marginalise minority community: Dave

Tracing the origin of harmonious co-existence of various religions in India to 5,000 years ago, Dave said,

"This country is built upon a beautiful culture…built on traditions. And in 5,000 years, we have adopted many religions...India gave birth to Hinduism, Buddhism, Jainism. Islam came here without conquering and we accepted. India is the only place where people who came here settled here without conquest, except the British. This country is built on a liberal tradition, in unity in diversity."

However, he added that there have been a series of acts and omissions lately, which show a pattern to marginalise the minority community.

"…How is it unity in diversity if a Hindu has to get permission from Magistrate to marry a Muslim? How can you shackle love? And Magistrate will take his sweet time and all the fringe elements will come in. How is it democracy?

History shows, Akbar married a Rajput woman, and he allowed worship of Krishna… Today we feel if someone falls in love and marries, we think it is an attempt to convert. I don't know where are we heading…"

Dave argued that though this case is ostensibly about uniform but, it is about how to tell Muslim students you are not allowed.

"This case is really about malice in law. It is about we are telling the minority community; you will do what we tell you…"

Minorities can be an explosive force which if erupts can destroy the social fabric: Dave

Elaborating on the need to prosper religious diversity, Dave submitted,

"It will be really nice when a Hindu girl asks a hijab wearing Muslim girl why you are wearing hijab, and she talks about her religion. It is really beautiful."

However, on the point of their 'segregation', he added, that Minorities can be an explosive force which if erupts can destroy the social fabric.

"More than 10,000 suicide bombings have taken place in Islamic world. Only 1 in India. This means, minorities have faith in our country...read papers, will see reports of daily suicide bombings in Iraq, Syria...but not in India…Religion is a very difficult frame of mind to control among the masses, it is the leaders who can guide the masses."

He referred to the speeches made by the Chairman of the Minorities Committee in the Constituent Assembly, Sardar Vallabhbhai Patel, to submit, "Nothing is better than to minority to place a sense of confidence in majority, and also on the majority to think who we will feel if we are treated like them."

Justice Gupta asked Dave as to what extent the Constituent Assembly Debates are relevant for interpreting.

Dave responded, "They are expressing the will of the people."

Justice Gupta then asked him if there is any precedent of Court relying upon Constituent Assembly Debates to interpret Constitution.

Justice Dhulia pointed out that in the NJAC case, Constituent Assembly Debates speeches were referred to.

Dave added that in Puttaswamy case as well, debates were referred.

Justice Gupta then asked, "To what extent Constituent Assembly Debates are relevant to interpret the present day Constitution?"

Dave responded, "To the fullest extent…They gave birth to Constitution. These are people who spent over 2 years on Constitution. And their views are sacrosanct."

"Fraternity is one of the avowed goals of Constitutions. And it has been completely lost sight of by the Government…Kindly keep of the warnings of these Great Indians first, this is my preface."

Dave submitted that for centuries, Muslim women have been wearing hijab in countries across Malaysia, Arabia, or America, in modern world, Muslim women are wanting to wear hijab.

He asked if the wearing of hijab threatening the unity and integrity of India?

"Nobody is saying that. Even the (High Court) judgment does not," Justice Dhulia said.

Dave responded, "Ultimately, that is the only restriction."

Justice Dhulia then said, "Here your argument can be self-contradictory. Because, the argument was, right to wear hijab flows from Article 19 and it can be restricted only under 19(2) only by a statutory law."

Fundamental rights not suspended merely by virtue of being in public place: Dave

Dave argued that the Karnataka Govt circular is "law" (under Article 13) by deeming fiction and it is void for violating fundamental rights.

He argued that the fundamental rights (in this case under Article 25) can be exercised anywhere.

Justice Gupta said that whatever judgments he has seen, they talk about religious practice inside the religious places.

"The problem the High Court sets for itself is whether it is essential religious practice, it holds it is only directory, it discusses fundamental rights and says when it comes to class room, there is no fundamental right."

To this, Dave responded,

"That is restricting too much… Article 25 uses the words "freely" practice, profess and propagate religion…The fundamental rights I have I can exercise anywhere, whether in my bedroom, or classroom.

The Bar Council of India prescribes a dress code. If tomorrow, I come to a Court wearing a cap, will your lordships stop? It was the tradition of lawyers to wear caps or turbans in court rooms."

Justice Gupta pointed that it was a tradition—whenever one goes to respectful places, head is covered.

Dave responded, "And classroom is a respectful place. Look at our Prime Minister. How beautifully he wears turbans on important days...it is a way to respect the people."

He referred to a passage in Shiru Mutt case which says that propagation of religion can take place in a "parlor meeting" also.

"So, it can take place in a school also," Dave added.

He continued, "If a Muslim woman thinks that wearing of hijab is conducive for her religion, no authority, no court can say otherwise…Your lordships must give due weightage to the South African court, UK Court, French court. Our court has extensively borrowed from other jurisdictions."

At this juncture, Justice Dhulia pointed out that when Shirur Matt judgment rejected the Attorney General's argument about essential practice, it was in the context of Article 25(2)(a). He asked Dave how can it be relevant for a right under 25(1).

Dave responded, "If there cannot be essential religious practice test for 25(2)(a), it cannot be there for 25(1)."

He also referred to the Ratilal Gandhi case where it was held that in cases of doubt, a the court should take a common sense view.

"Can we say from a common sense view that hijab is not an essential practice? We may like it or may not like it, but that does not affect their right to wear hijab."